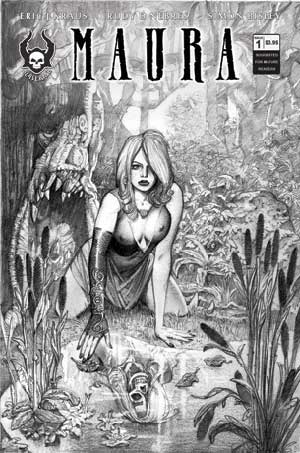 Ah …nothing more frightful than a woman scorned! Well with Maura she takes it to extremes. Simply enough, it begins with romance, a love interest and an assumed relationship. Derek Morgan works at a typical corporation setup. The same rules apply there as any other like establishment. Though as a hardworking computer editor he is somewhat unsatisfied with the number of temps that come thru the office. One in particular catches his eye. She goes by the name of Maura Sterling. Beautiful, well endowed, and extreme to the point they hit it off instantly. Time passes and the relationship blossoms. Derek invites her to his secret neck of the woods and they make love.

Though unfortunately once the moment has passed for Derek he begins to approach the whole thing from a distance. Maura who is under the impression of being head over heels agrees to meet him in the secret garden for another date. This leads of course to Derek blowing her off for another new prospect in which begins to set something in motion. With days past and no sign of Maura, he goes about his lifestyle and moves forward on a new prospect.

It’s that fateful day when Derek brings this new girl to his spot that he realizes that Maura has been waiting ever since in the same spot.

This begins the wrath of Maura who has died and become one of the undead. Her wrath shows no mercy and the new empowered Maura is in short a Banshee unleashed. With her sights set on killing off men who has walked down the same path she does so on nightly basis by visiting local clubs and bar hangouts. Issue #2 takes her on voyages to escape her surroundings to find herself and her place is this world. While she us of the undead, she is somewhat able to control the illusion and maintain her beauty. This is until she becomes enraged and exposes true form.

Maura is series with alot of heart. Even with the incredible wrath of the undead, our main character is only on a quest for love and belonging. With a detective hot on her trail you honestly root for the bad girl in this case. The pencil work and rendering of Maura are absolutely beautiful which compliments the extremely well written tale at hand. I can honest say this far exceeds many of the stories I’ve read of late that only focus on the blood and and chaos aspects. Though there is true emotion embedded here that pushes the whole one with the undead premise. While I’m usually more prone to color, the clean raw pencil look really works and sets a certain mood here. This so far is my favorite of the Berserker releases which are all good in there own respects.

Check out other books at: Berserker Comics