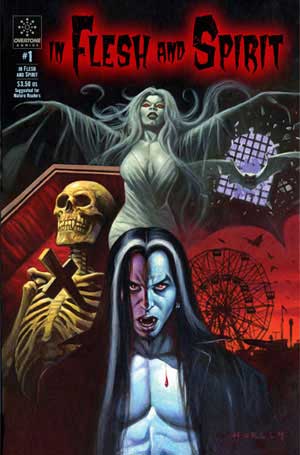 IN FLESH AND SPIRIT (comic)

Gothic sensibility, Vampires, the undead, and rock and roll…what more can you ask for! “In Flesh and Spirit” is the title of this comic with story and concept by a fellow calling himself  Baron Miscuraca. Our debut introduces the origin of the vampire by the same name. Baron fronts the band Vasaria which is an actual real life band per way of the back inside cover ad. David G. Williams has provided beautifully done inking and pencil work with gray tones by Jarreau Wimberly.

Our story begins in the European 14th Century where we find Baron serving his church as a musician and devoting his life to God. As a Bass instrumentalist, he works night and day in preparation of his first live performance for the church-goers. Though with negative response instead of praise he was punished as the notes became defeating to all who listened. Upset with his lack of acception, he continued to play in private which summoned the very demons of hell. The demon that arrived went per the name of Apathess , a beautiful siren of unholiness who in turn gave him the gift of the life through the undead. With his new transformation Baron went about feeding on victims and exhausting himself to the point of boredom until he encountered a nun by the name of Andrea who saw him for what he was and took his life.

Forward now into modern times and 7 centuries later, the Baron is brought back per dislodging of his death stake. His new servant and savior Reina serves him well giving him accommodations and herself as the Baron regenerates. It doesn’t take long for the Baron to re-acquaint himself to this modern world and its deviations as he fronts a rock band playing bass. Though even in the new world, things grow old and in turn he seeks out salvation per way of the church.

“In Flesh and Spirit” is a gothic tale that centers round the issues of good and evil and a journey of self awakening. Baron takes on the form of classic vampire tales with a twist of modernism. This time its not about being hunted and slain, but more about the Baron finding his own way to light and the curse he bears. This first edition sets the tone for an interesting series that should unveil quite nicely.

I don’t recognize the label Overtone Comics, so I’m assuming this is a debut launch for them as well. The comic does something that is becoming more apparent in today’s economy and marketing trends, which is self promotes itself and its real life music releases. The comics is void from ads at all with the exception of 3 promoting the release of Barons music work. I think the idea makes sense and wish the band well. You have to be self sufficient and inventive these days to make an impact. Whether they sell comics at shows or on the market, its a nice package of promotion. The artwork and shading is done professionally and holds up to any other release. It also features an excellent cover illustration per way of Alex Horley. For gothic and comics fans this is a nice tale and features some pretty cool illustrations.

The comic will be available from Diamond distributors in Feb. but is available now at Overtone Comics in which they also host a number of other Vasaria products.

Tags In Flesh and Spirit