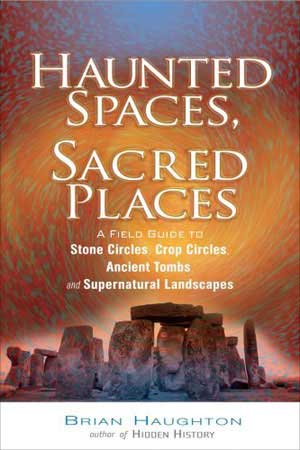 For those of you who saw the movie “Indiana Jones and the Crystal skull” or “The Mummy 3”, know that these had some pretty fantastical stories or ancient cultures, magical places, locations in the world that harness extra ordinary histories and . What if you were to find that many of these weren’t works of fiction but based or entirely a retelling of past events and places? “Haunted Spaces. Scared places” Author Brian Haughton is a book that explores just these very things. Written in 2008, you get a current look of the history and lore of earths sacred grounds.

As mentioned in its summary , Brian has accumulated and researched 32 ancient places through the world. Some of these are very familiar while others might have sneeked under the radar. Brian a qualified archaeologist, has spent many the year writing for a number of about publications and internet sites about myths, and unexplained phenomena.

We visit the Mausoleum of China’s first emperor in which the film “The Mummy 3” was taken from. As it told the emperor Quin Shi Haung was an emperor who brought great advances to there culture. As time passed he became fascinated with alchemy and mysticism to discover the secret potion to eternal life. Though this never came to pass, he experimented with Mercury pills which ended his life at the age of 49. Though when time came, over 700,000 workers and craftsmen who worked with his underground mausoleum were executed and preserved in this mausoleum under bronze and jade. A number of traps were included such as automatic crossbows to prevent thieves form stealing secrets. Though ultimately the mausoleum was covered with molten copper and earth to protect all within. Archeologist today have discovered the 7000 clay warriors but many secrets are still buried beneath awaiting final excavations.

The Ark of Covenant, although history has placed its location the actual ark remains shrouded in mystery though to have been removed and relocated ages ago protected Author select guardians or perhaps destroyed altogether. How about Glastonbury with its mix of legends and tales , visited by Jesus perhaps, a burial suite for his crown or merely a extension of a local poem….much has been reported. Maybe your interest is more in the legendary pyramids or the monks mound in Cahokia? What is the deal with the Ohio serpent mound? Who is this race of mound builders from the native american cultures? Were they built to honor there traditions and use of symbolism? What do we really know about the temple of Zeus and how the cultures looked to gods for answers?

Brian explores several metaphysical sites across the globe such as Stone Henge, The temple of Zeus, The Chartres Cathedral, Ancient Dartmoor, the sacred hill of Tara, Axum..where the ark of the covenant is supposed to be buried and several more fascinating locations. A history book of a different kind, much information and study of relationships between the metaphysical and real locations uncovers many facts and historical documentation in relation to these unique sites. Each chapter details much that has been reported or uncovered also leaving a trail of facts in question that still remain a mystery today. Each location contains a photo of the site in discussion.

More important is this books ability to serve as a potential future tour guide for those who wish to visit some of these locations first hand. With book in hand you can seek out the sites of your choice that demand further investigation in person.

It brings the question again and again of why is it that so many strange occurrences seem to be connected with them? a unique book with a unique collection of data that will absorb seekers of the truth and unknown. Explore this enigmatic guide and tour of these ancient civilizations and the folklore surrounding them. Is 32 sites enough? I hope not…so that we’ll have the pleasure of spending time with Brian’s next release.

Check out other books by the author at: New Page Books
Available a www.newpagebooks.com