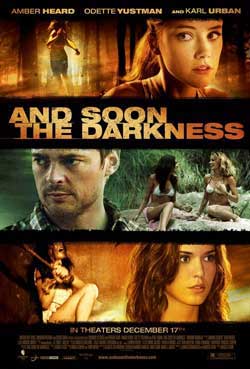 When two American girls on a bike trip in a remote part of Argentina split up and one of them goes missing, the other must find her before her worst fears are realized.

I’m a big fan of the “don’t stray too far in foreign countries” film circle, however the filmmakers of today either are trying to get a message to us or just love to re-do past themes to death. I enjoyed “Hostel”, “Turistas” – (not as much) and then there is a whole list that I’m not going to drum up at the moment.

My first thought is, these 2 beautiful party girls probably have seen those films too. So maybe, it’s not a good idea to run off with Pedro from the old country for some quick loving and a handful of shots. However, for those who didn’t see those films, well your in for some trouble. The idea of girls being captured for slavery and ported across the waters unfortunately is a true realism that exists these days. Though I hate to see good ol US citizens lured into this trap. The film sets its premise on this real problem, but also tends to lose its point along the line.

As we enter into a warm climate, a few cool bars by the beach and alot of weird stares from strangers…our 2 characters Stephanie and Ellie are out on vacation as part of a bike group living it up Vidal Loca style. They decide the bike trip is not for them and wander further on their own accord. Stephanie (Amber Heard) is the smart one and Ellie (Odette Yustman)is the hot, not so bright one who takes a few more chances than a country like this will allow. Partying, dancing and a little bit of the “I love the nightlife” get her in trouble and ultimately kidnapped for future sale. Stephanie begins to get nervous when Ellie doesnt return from a recent quarrel. The local police come across useless and it seems that the only one who is sympathethic is a man named Michael. Michael (Karl Urban) is the resident non-local who seems distraught most the time by reasons we are to be discover later.

Michael comes to the aid of these foolish females more than a few times who just don’t take the advice of the locals. I found his role on the most part unnecessary in the premise of the film. For a minute I couldn’t remember where I knew the actor from and then it occurred to me that he plays the new “Bones” in the latest Star Trek film.

Odette Yustman was given alot more to work with in prior films like “The Unborn” and “Cloverfield”, though this round it looks like she is stuck with a simple “girl gone wild” character.

The film really doesn’t leave much more to talk about as the phrase, “don’t leave your vacationing group” should say it all. I think the movie “Train” actually captures this idea better and with more visceral coating. “And soon the Darkness” doesn’t suck, but it probably also doesn’t deserve a cool “DVD” quote either. Buyers beware.

Directed by Marcos Efron, this film feels awful familiar mostly because its targeted at a choice age market who watch these kinds of films. It lacks in originality but makes up in professional production. I think maybe it succeeds better as just marketed as a “2 hot babes” film that run into some heavy drama and foreigner violence. I didn’t feel the story really went very far and lacked a bit of premise. Maybe its just me who tends to need more meat on his plate these days but I ended my watch on a “check that one off the list” note. There are some legitimate thrills in “And Soon the Darkness comes” however it’s not much of a horror film beyond some cautionary tales of straying to far from your homeland. I’ve seen so many of these films , these days that you would think that the idea of vacationing is best left to Disneyland and a trip thru the coast. Kidnapping in foreign countries for ransom or other continues to grow in troubled economic times. I think at the end of the day, its that reality that plants the seed for these films to work on some part.

Tags And Soon the Darkness 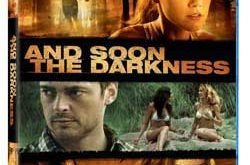 And Soon the Darkness: Release and stills Gallery