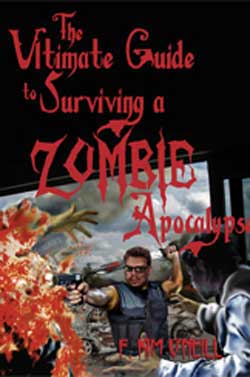 The way I look at it, there are three main reasons for purchasing a zombie survival guide: 1.) An honest belief in the eventual rise of the dead from their graves and an earnest desire to survive such an event, 2.) as a reference book for zombie fiction and/or role-playing campaigns and 3.) Simple and pure entertainment of moderately geekly dimensions. Please notice that I’ve left out “solving late night whiskey-fueled arguments between friends over who would survive the longest during a zombie apocalypse,” which was omitted on purpose. We all know those arguments can only be resolved by the requesite sloppy-drunk fistfight in the parking lot.

With that in mind, I’ll keep my review based off of those criteria.

Utilitarian: The biggest calling card to the hard core zombie survivalist here is that it is a very streamlined guide. The information is clearly labeled, bullet-pointed and logically organized, which certainly makes finding what you need simple and quick. Combat and weapon use techniques are illustrated as well as explained.

Information-wise, my only issues are based in philosophical differences, the biggest of which deals with the avoidance of any other gatherings of living human beings (otherwise known as this funky little thing called civilization). While F. Kim seems to feel that any large group would be run by an evil dictator out to quash all freedom and probably rape your children, I believe that staunchly keeping to your own insular, small group would restrict long term survivability to one or two generations at most. The worst problem I see here, though, is the format of the book. It is light, but a tad too bulky to easily fit into a pocket or similar clothing based container in the event of an immediate bug-out.

Dungeon Master/Writer: Many of the same benefits of the last category hold up here as well and this use makes the negatives irrelevant. Plus, the inclusion of different types of zombie (viral, supernatural and voodoo) and type-specific strength and weakness comparisons go far to make this stand out. The lack of damage tables will annoy DMs, so plan on some hefty conversion work from your existing manuals. Writers should find plenty to run with, though much of it is compiled from existing texts that they probably already possess.

WEEEEEE!: This is where I am going to come across the harshest because I didn’t enjoy myself in any way while reading this. The big killer was the arrogant “you all are way too stupid and complacent to have any chance surviving this but I am the great, mighty last hope of humanity in these dark days to come” tone. After the first thirty pages or so, it became incredibly grating and hard to stomach. Especially after the following statement: “the best way to determine the difference between a homeless person and a zombie, if you need to (italics placed by the author), is to take his pulse”, which leaves me curious as to where he’s finding homeless people that are both rotting and trying to eat his flesh. Worse, does that mean he shoots them in the head to destroy the brain and prevent them from infecting him with poverty? At the risk of exposing a lack of professionalism unbecoming of a reviewer of such high esteem as myself (go ahead and laugh), I must admit to skimming through the last quarter of the book because I simply couldn’t bring myself to read any more. Take that for what you will.

Those comments aside, the real problem this book faces is its competition. There’s a sea of similar books out there, including the hulking beast rampaging through the city that is Max Brooks’ Zombie Survival Guide. At more than twice the price (you can find new copies of ZSG on Amazon for less than six bucks), TUGtSaZA doesn’t present any solid reason to purchase it over what is considered by many to be the definitive guide of its type. Heck, the All Flesh Must Be Eaten core book is much more versatile of a sourcebook, vastly more entertaining and only runs four bucks more for a hardbound version- with damage tables!