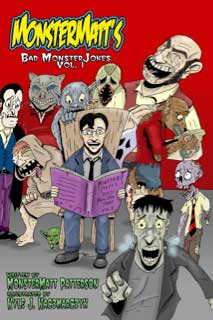 Book publisher Pill Hill Press, has acquired “Monstermatt’s Bad Monster Jokes Vol.1″,written by Monstermatt Patterson, illustrated by Kyle Kaczmarczyk,with a forward by Joe Moe, for their non-fiction imprint, WestNeb Books. After a brief and successful run with a previous publisher, author Monstermatt Patterson,and illustrator Kyle Kaczmarczyk left, in hopes of finding a firm to move the book forward. It wasn’t long, before the duo found a suitor in Pill Hill Press/West Neb Books. According to Monstermatt,”They were still interested, even after reading the book!  Now,that’s scary!”

The book is a self described collection of over 400 badjokes, rancid rhymes, putrid puns, and sophomoric song parodies, with illustrations, focused on horror films, monsters, sci-fi, superheroes, and some popculture, for good measure. Monstermatt says”With WestNebBooks taking over, we can get back to reaching our growing audience,one badjoke at a time.” “It’s what I love doing, I love the interaction between myself and the audience.Groans after my punchlines,are a tasty morsel to me.”

“What amazes me, is how quickly people responded to the book. K yle’s illustrations are brilliant, and right on the mark. They grab the reader’s attention,and make them want to dig in!” Dig in, the readers have. At book signings, fans have become smitten with the self depreciating humor, a combination of Mad Magazine-meets Famous Monsters Magazine,and the sharp illustrations.

“We’ve been reaching a fairly wide demographic,from age 10 to age 60. It’s great to see them read a little, and shake their heads, or chuckle. The drawings get a great response, in those ways as well.T hey really drive the gags home!”,s ays Monstermatt.

Fan mail continues to come in,with the most frequently asked questions being:
When will the book be available again?
and…
Will there be a “Monstermatt’s Bad Monster Jokes Volume 2”?

According to Pill Hill Press and WestNeb Books editor Jessey Marie Roberts, the book will be the first for the new imprint. They have proposed an early 2011 release for Volume 1,and Volume 2 is currently being written, with no release date yet.

Does the 666 on Damien Thorne’s scalp, mean he’s the Devil?
No,it’s his “credit score”!

What happens at an Android Briss?
A “Circuitcision”!

What do you get,when you cross a Vampire and a podiatrist?
A “Nosfera-toe”!

What coffee drink does The Phantom of the Opera like?
La lalalalalala,latte!

Here’s what reviewers are saying about the book.

“You’ll go back to the beginning and start reading it again! A very enjoyable read by two rising stars!”
Pissedoffgeek.com

“I laughed,I groaned, I shook my head in disbelief!I highly recommend this book!”
The Monster Librarian

The book will be available at major online book re-tailers, soon. For more information,and updates,
To keep up with Kyle and Monstermatt,follow them on Twitter at: