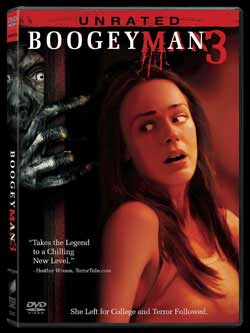 Although her best friend supposedly committed suicide, college student Sarah Morris (Erin Cahill) knows the girl’s wounds weren’t self-inflicted. But her insistence that the Boogeyman was to blame only prompts her roommates to think she’s losing her mind. Now, Sarah’s splitting her time between trying to convince her campus friends that their lives are in serious danger — and trying to save her own.

Believe in the boogeyman and the boogeyman believes in you! Not the tag line for the film. But certainly should have been. Welcome to round 3 of the Boogeyman franchise. Which at this point we can call it going on the 3rd film. To provide a quick retrospective. Boogeyman #1 establishes the supernatural concept of the character. Also in spite of mixed reviews this introduction was well received as a chiller to watch. It’s CGI ending being the downfall to a successful scary build up. In part 2 we establish a new angle by using psychology studies to explain the Boogeyman. This sequel was the worst of the 3, and partly because it involved a masked character through most of the film. Now in full swing we return with sequel #3. It looks like after 2 films the filmmakers learned from there mistakes and finally pulled out a Boogeyman that we can grab on to. Our latest release stars actors: W.B. Alexander, Erin Cahill, Elyes Gabel, Chuck Hittinger, John Laskowski and is directed by Gary Jones

In Boogeyman 3, alot of tried and working formulas were incorporated even though many were stuff we had seen before. I’m sure this will be a mix of onions, though they usually arrive at these decisions based on the majority expectations than horror fan purists. The storyline picks up where #2 left off, though this time without the crap. Boogey man is essentially given strength per the belief in him by others. Not unlike a certain Freddy Krueger character we are all too familiar with. Of course as murders become more frequent the myth perpetuates channeling the whole cycle again. Call it empowerment.

Our main character Sarah Morris (Erin Cahill) is a psychology student with her own shared radio talk show. Opposite her she advises student call ins with her radio partner and teacher Kane. Audrey (Nikki Sanderson), the daughter of Dr. Allen (Tobin Bell), (from Boogeyman ) calls in after being terrorized by frequent hauntings. Too late to save her, Sarah begins to suspect supernatural events which fuels the creature even more. The legacy of Boogeyman # 2 carries over in the fact that Sarah is familiar with the incident and writings of Dr. Allen. From this point forward the film works much like we’d expect from a “Friday the 13th”, “Nightmare on Elm Street” or even “Darkness Falls” franchises. Friends of Sarah get murdered one by one until the inevitable finale and confrontation. We have a mix of clever kills, hallucinogenic realities and a good versus evil struggle. We also establish in this film a location that the Boogeyman can pop in and out of, it’s own netherworld of sorts.

Complaints? While alot of clever moves were added and worked quite well, I had a few issues with the laundry matt scene. Taking a cue from Bloody Valentine and even Pulse, we have the ol scary washing machine trick with a body that gets sucked in. Here the filmmakers took the day off as it was real apparent the victim was composited onto the fronts of the machine rather than using a more effective real prop scenario. The suspense was there, they just needed to deliver on it with out computer tricks. Also the man in a box scene has been used many times before, however this could have been pushed farther by clever reveals of the results rather than a man through the floor bit……… that’s it, the rest worked fine for me.

Our Boogeyman, who I was starting to lose faith in has finally come full circle with version that I hoped for all along. We tried the all CGI route and it failed due to a viewer detachment. We also tried the Michael Myers version which went against the general myth. Our latest Boogeyman hits the mark as the embodiment of what a Boogey man “should” be (sorry I know its subjective). Dark creature humanistic features with a high sense of ethereal. Yes, I’m proud of our latest Boogeyman who turns into shadows, walks though walls, moves in chop cut jerky fashions and lurks from within closets, beds, nooks and crannies. If history is any example, stick with what we know of the Boogeyman legend and embellish that. In which they have.

For viewers, Boogeyman 3 is a ghostly creepfest that delivers with style! I think its latest manifation is a nice base to continue the franchise and establishes a plane of existence for our creature to emerge from. If #2 was diappointment, #3 restablished the Boogeyman where it needs to be.. High marks from the filmakers and a nice return.