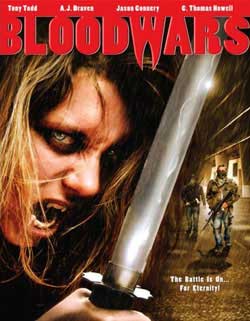 Blood Wars (originally titled “the Thirst”) is a B-movie tale of vampires, power struggles and the lives of local college kids.

On one hand we have the bully rich kid Cameron Zeidler who just happens to be warlock and a big d*ck to boot. On the other we have Will (A.J. Draven) a sensitive passive aggressionist who just enjoys hanging with friends and exploring his new relationship with college fried turned girlfriend (Allison Lange)Jayne.

Unfortunately, he finds himself in the middle of a battle between vampires and a group of warlocks called Sentries when he stabs the Warlock (the big d*ck) in a brawl and then is bitten by seductress vampire Amelia (America Olivo ). Suddenly his life becomes even more difficult as he deals with the hunger and the rage of Claudius who feels has lost his place in the vampiric ladder.

The college epic is filled with your usual cliques of college life with a dose of vampirism to add to the day to day troubles. The good news is the the bully-d*ck gets killed pretty quick, the women are pretty hot and Tony Todd is in the film.

In the vampire world, there seems to be concern over a power struggle that is brewing among the brood. Tony Todd, the vampire leader, rules over his coven and concubine while additionally dealing with his protege Claudius played by actor Jason Connery.

Blood Wars is pretty standard b-movie fair. It seems to drag in the middle as we journey with Will and his new vampiric issues. I always find it funny when actors such as , C. Thomas Howell are promoted in the release but only appears in the film for 5 minutes. I’m sure there isn’t a disappointed , C. Thomas Howell fan club that’s just heartbroken but none the less, viewers should know. The film moves much life an episode of Buffy, so vampire fans should be ok with the content. The pace was a little slow for my tastes. I guess I’d trade lore in place of good ol Blade style killings to fill my evening. Maybe I’m just overfilled with too many vampire films lately and a bit exhausted with it all. I would of rather seen the budget directed to FX than using a few name actors. I think that would have elevated the films action portion. Tony Todd plays a major role in this film, though it mostly entails reciting lines from his throne.

The DVD cover is a bit misleading as there really isn’t any warfare or militant action. 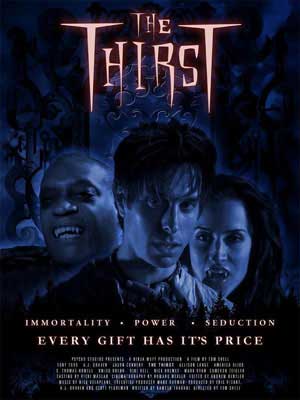 Though in all fairness, this film is for causal viewers, who would like to watch a vampire based film with no gore, no nudity and prefer a less violence-based film. There is alot of drama throughout, more than there is action. A more appropriate title may have been “Blood Brawl” However, if your looking for something light then this film is for you. I’d compare this to a sci-fi channel movie but with 1/4 the budget. It comes across at times more like a soap opera or a play, but again this may be the light fair your looking for and we realize that not all horror fans want it served up intense.