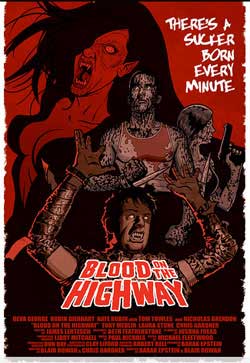 After a gastrointestinal mishap with their map, three twenty-somethings on a road-trip accidentally wander into Fate, Texas, only to find the town populated by bloodthirsty, dimwitted vampires. A brutal run-in with two carnivorous convenience store clerks leads the three to take refuge with the town’s only surviving humans and prepare for battle with an army of the undead.

From within the first 5 minutes when Bone picks up some dogsh*t and throws it at his dad, yunno your in for hilarious ride. We are joined from the get go with characters Sam (Nate Rubin), Carrie (Robin Gierhart) and Bone (Deva George) . A mix match of odd personalities that will easily put a smile on your face. As they head out on the highway to attend an outdoor festival, they get lost due to Sam’s puking on the road map from motion sickness. Lost in the country, they find themselves in a hick town called Fate. This is where the fun begins…..

Upon stopping at a gas station for maps and beer they come across the locals who just happen to be vampires as well. Sam proceeds to get bitten and they hightail it out of there to discover the town is infested with these things. One event leads to another as they enlist a local survivalist named Byron (Tony Medlin) who invites them to take shelter as his home. They meet up with even more strange types who are even stranger than the vampires themselves. This begins a crazy blood bath and all out war for survival.

This film was alot if fun. With characters that you instantly fall in love with, BOTHighway combines alot of classic tongue and cheek humor with horror stylings into a new original piece of filmmaking that I’m sure will get passed around more than once. It’s got that post 90’s cult-like feeling written all over it that is quirky enough to keep you rolling on the floor as well. Hell, I laughed more times watching this film than I did in all the most recent Dane Cook movies combined. Bone is the quinessential badass and this film feature some of the best vampire killing songs I’ve heard in a while.

Usually I would pick out specific actors, but this is a full assemble of great and quirky performances from all. Its the right mix of odd combined with some pretty cool gore moments that get even gorier. I promise you you haven’t seen a vampire quite film like this.

Barak Epstein does an amazing job at proving that a film doesn’t need to be a big studio release to still be wildly entertaining! Writers Chris Gardner and Blair Rowan did a bang up job on writing a script that leaves classic lines in your head long after the movie is over.

This is a film I’ll watch again and again for years to come! I think this release will find its way on to many film viewers cult movies shelf.

Tags Blood on the Highway