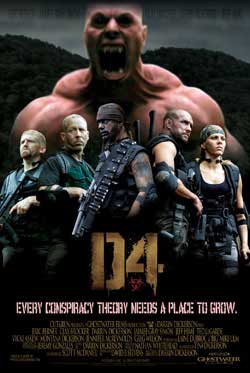 D4 follows a team of special ops mercenaries on a mission to rescue a kidnapped kid believed to be held in an abandoned government facility. Hired by the boy’s mother, a wealthy doctor with high reaching influence, all seems to be an easy job. But as things unfold, what was meant to be a simple search and rescue turns into a fight for survival.

With a title like “D4” it’s hard to come to the table with any preconceptions about what the film is about. I received a screener the other day that I must say was one impressive packaging job. Metal casing, custom nameplates…the works. Definitely something that caught my attention.

D4 captures that special “A-team”, “Ocean’s 11” build up that features a convert team of bad asses handpicked to take on a major job funded by a wealthy doctor who wants her son back. It seems the doctor wants this job handled without any mess ups and requests an in hiding mercenary named Sloan. With a generous offering that he can’t refuse, he is also given the funds to get his team together for the mission. The target, a kidnapped boy being held in a government facility so coined “D4”. The team consists of Sloan, Brocker, Snipe, Smoke and Cutter. Brocker (Clay Brocker) is a shoe-in if Wolverine and Sabre Tooth ever decided to announce a lost brother. Darrin Dickerson, the writer and director of the film also stars as fellow mercenary “Smoke”. Eric Berner takes on the role of Sloan who acts as the team’s fearless leader. Snipe, played by the lovely Jaimee Gray Simon is our female addition who brings to the table an eye for hitting targets at long range.

As a sub story, Ted LeGarde is Old Man Dalton who is also on a quest to retrieve his grandchild who he reluctantly submitted into the government program. His grandchild is suffering from a case of seizures and Epilepsy that the doctors said could be fixed thru a new experimental program. The only trouble is now these kids are unreachable and perceived to be under testing. Further investigation leads him to find that it may run darker and deeper than they anticipated.

When the team heads on in full military apparel they run into more than they bargained for. While scoping out the area they are confronted by a large muscular juggernaut of a man garnishing sharp teeth and an uncontrollable urge to kill. In fact, bullets bounce off him like nothing. This creature which is so titled “the Beast” in the credits was played by actor Big’ Mike Ulm. Ulm is an oddity in himself sporting a physique and size that is almost freakish by nature with out the help of any practical effects. My first thought was, didn’t they CGI a similar looking creature in the “Hulk” film? You mean someone actually exists that looks like that??? I’m calling this one a steroids overdose for lack of better description….but none-the-less an appropriate pick for the role.

At this point the film began to take on a “Predator” feel more than anything. I was still confused as to why the hired guns still persisted after seeing bullets take no effect, but then again they were on a mission. The team follows the trail which leads back to an old warehouse, that supplies a basic but distressed environment for the beast and a beast in training subject. The group continues to seek this thing out and rescue there now captured colleague to a fight to the death encounter.

There’s plenty of action here and the directing is done with a trained eye. I enjoyed the build up. suspense and action sequences that carry the story forward. The film even comes equipped with a nice surprise ending that I didn’t see coming myself. I suppose you could call it somewhat of a monster film but mostly it rests in the action genre. More government conspiracies provide the paranoia background that fuels this script. I think as our culture progresses, we will see alot more films with this basis…as it seems to be at the heart of minds and concern. Darrin Dickerson provides us with a fast moving mix of genre that’s high on suspense. I don’t think it will take this one too long to find a home with distribution for the masses. I’m looking forward to see what he comes up with next and maybe a few more freaky actor picks to contribute as well.