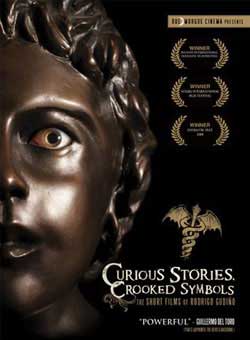 Anthology of award winning films including The Eyes of Edward James, The Demonology of Desire, and The Facts In the Case of Mister Hollow 2009

I had heard some good things about Rue Morgue’s founder Rod Gudino’s work, though you never can tell until you check it out for yourself. As the head of one of the few major print magazines in publication, Rod certainly has had his share of movie viewing and perspectives to draw from. In fact I like the idea of industry folks turning their passion into motion pictures. It sort of culminates a progression to the next level of things. That is… mainly creating rather than only critiquing.

The DVD is titled CURIOUS STORIES, CROOKED SYMBOLS, a title that almost has a classic feel built into it from the start. As the title implies, it’s a collection of shorts, 3 to be exact. Each short film is a concept and exploration in itself. The titles of the shorts are named as such, The Eyes of Edward James, The Demonology of Desire, and The Facts In the Case of Mister Hollow.

The first impression off the bat is nice production. The time was taken to produce a product that isn’t just your grab a SD video camera and shoot kind of product. No, this is real professional operation done the right way.

The first of the bunch…. The Eyes of Edward James reflects on the retelling of a memory Edward has of certain events that occurred at his house. The narration is done per an assumed psychiatrist as he directs Edward thru his recollection of the events. The recollection consists of the potential stranger in his house and a few frightening visions that seem to intertwine in fragments. These fragments though are what makes this piece so unique. We are taken back the events from a POV tour of the house.

Much like they did in REC, we only see what is directed towards our vision rather than a wide perspective of all the events. The camera takes the place of Edward as his paranoia about a stranger or perhaps a unwelcome affair becomes an obsession upon hearing an upstairs noise. What follows though is a study on fear and anticipation. The camera movements almost invite something unsettling to invade the visual space at any second. This and the reactions of his wife create a thick layer of intensity that breathes on its own. The result is comparable to a nightmare in motion..though check it out for yourself.

The Demonology of Desire picks up as a young man who has a crush on a local school girl follows her home in an effort to win her friend ship and perhaps share his feelings towards her. She, the rather preconscious and extroverted Ramona seems to have a bit of her own agenda. Strangely this begins with asking the young boy to her house accompanied by a close friend of hers. They tell the boy that they live there while they act out rather oddly to the old woman who lives upstairs. In fact its soon apparent that there is a bit of fun and games woven into the realty of the situation. How about a demon kept in a cage in the basement and some not so innocent attempts at showing ones love for the other by way of murder and suicide. Demonology of desire takes a more innocent approach to the subject of the extremes of love mixed with a heavy does of horrifics.

The most inventive of the bunch is short 3 titled: The Facts In the Case of Mister Hollow. This short is rather an exploration in visual 3D space by using a single image to tell a story. In theory it seems like it would be hard to explain….but the fact here is that it works and works really well. Hats off to the team and Vincent Marcone for such an inventive piece of work.

In addition to the shorts, I have to say I really enjoyed the Behind the scenes look at the Rue Morgue headquarters in Toronto. A rather impressive building…. it provides the perfect horror work place for the staff and crew. Jovanka Vuckovic , the cherry red headed seductress entertains us with a quick tour of the facilities. It’s a nice piece that makes this package entertaining, informative and most of all a welcome horror addition to the club. One thing is certain, whether Rod has acquired talent or is a product of his fascination…… he is one to watch out for when the focus turns to features. A nice change of pace from formula driven products, Rod’s love for classic horror approaches is apparent and worth the ride!