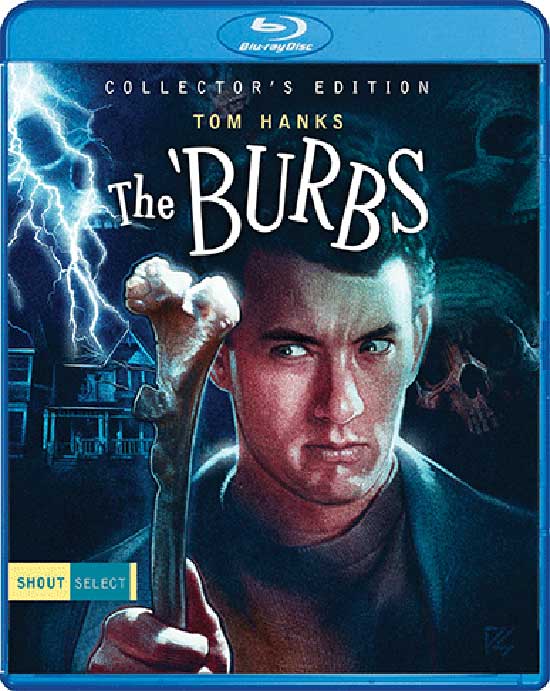 While on vacation, suburbanite Ray Peterson (Tom Hanks) wants nothing more than to fritter away his time at home — drinking beer, reading his newspaper and watching a ball game on the tube. But when new, secretive neighbors move in next door, Ray and his friends (Bruce Dern and Rick Ducommun) let their paranoia get the best of them as they start to suspect the newcomers of evil doings. Naturally, the nosy trio decides to investigate.

Hell-o, flesh hungry neighbors of the suburbs. I will start by saying, as far as Horror/ Comedy goes, this is one of the three that I can stand (besides The Lost Boys and now Headers). That’s right, many of you may not agree with me on this, but I hate any Horror that attempts to be funny in any way shape or form. I absolutely cannot stand Sean of the Dead, Slither, Army of Darkness, Evil Dead 2, House II and especially the Scary Movie series (which is a f*cking retarded joke in itself)… or anything else of the sort. This film, on the other hand (and in my opinion) gets away with keeping the creepiness while making you laugh at the same time. I’m referring to the film that makes you think twice about those new neighbors, The ‘Burbs. 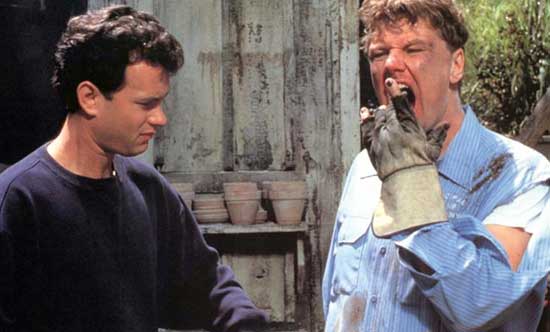 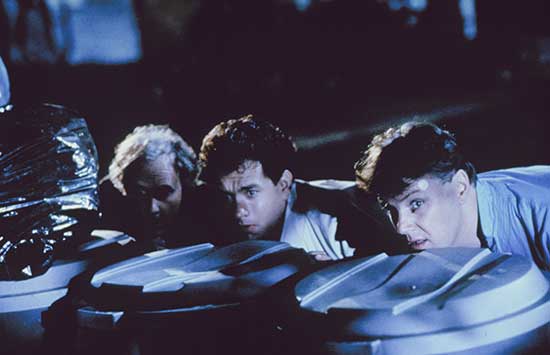 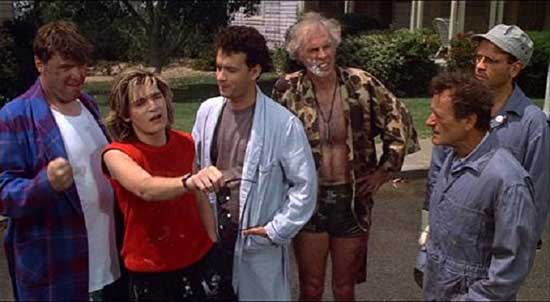 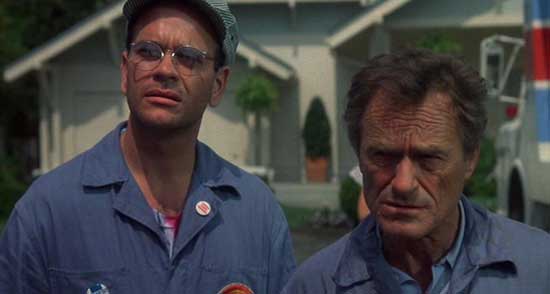 It begins with the single most awesome Universal Pictures introduction that I have viewed to date. As the globe keeps spinning after the Universal logo fades away, the view zooms closer and closer to the Earth. It then enters the United States… and into the town and finally, the neighborhood in which the film takes place. A creepy background score pulls you in right from the beginning as well. To this day, I have never seen another Production Company introduction so appealing or innovative, and this was in the late eighties.

The building of characterization is well done throughout the first part of the film as well. We first meet Ray Peterson (played by Tom Hanks of The Lady killers, Vault of Horror, Stephen King’s The Green Mile and who can forget his acting debut in the Horror classic, He Knows You’re Alone… among countless others, usually in the comedy genre). Ray is taking the week off at his home with his wife, Carol (played by Carrie Fisher of Frankenstein 1984, Scream 3, Sorority Row, the television version of Rosemary’s Baby… and of course, the irresistible Princess Leia of the “first three” Star Wars installments… episodes IV: The New Hope, V: The Empire Strikes Back and VI: Return of the Jedi), their son… and unfortunately (but with good intentions) his neighbors, Art ( played by Rick Duccommun of Ghost in the Machine and Gremlins 2: The New Batch) and Mark. Rumsfield ( Bruce Dern of Monster, Dead Man’s Revenge, Bloody Momma and Black Sunday). Mr. Rumsfield and Art keep Ray’s peaceful week at home anything but pleasant. 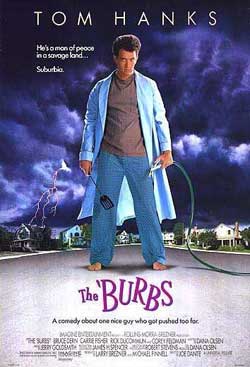 They are out to keep an eye on his new neighbors. Something is not right on their side of the wooden fence and Ray and the boys are determined to find out what it is. Meanwhile, Carol and Mrs Rumsfield are trying to be the sweet voices of reason and talk them out of spying on the neighbors and making a friendly conversation. At the same time, their son’s older friend, Ricky Butler (Corey Feldman of Gremlins Friday the 13th parts IV: The Final Chapter, V: The New Beginning, Stephen King’s Stand By Me, The Lost Boys, The Tribe: Lost Boys 2, The Lost Boys 3: in Production… which he is also rumored to produce, Terror Inside, Puppet Master Vs. Demonic Toys and Evil Obsession… not to mention the other half of the legendary Cory/ Corey combo of Feldman and Haim that lasted throughout most of the eighties) is trying to help them spy and feeding their son with stories of the neighbors being nocturnal feeders.

The neighbors, the Klopeks, are quite and usually keep to themselves, besides the furnace under the house. Are they innocent new neighbors, or bloodthirsty killers. Their family consists of (the) Dr. Werner Klopek (Henry Gibson of Vault of Horror, Tales from the Crypt and The Twilight Zone series), Uncle Ruben Klopek (Brother Theodore of Nocturna: The Granddaughter of Dracula, So Dark in the Night and The Black Widow. The Burbs was the last film to capture his timeless talent before his death in two thousand one) and their son, Hans Klopek (Courtney Gains of Colors, Freezer Burn, Raven, the upcoming Bloodlust and Frightland, but he is probably known best for his debut roll as Malachai in Stephen King’s classic Children of the Corn…”outlander!”). They mostly come out at night, they are reclusive and they are suspected of killing the neighbor, Walter.

The acting is excellent in this film. From brilliant comedic performances from just about the entire cast (Hanks and Dern especially shine in certain parts as tempers flare). The character’s chemistry is solid and enjoyable throughout and it really shows and shines on screen. Excellent timing and delivery is displayed from each of these lovable personalities… Good neighbor and bad neighbor. 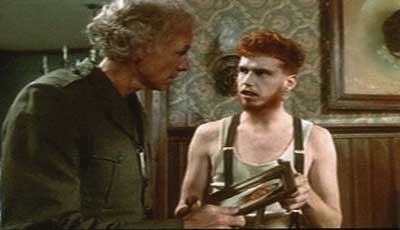 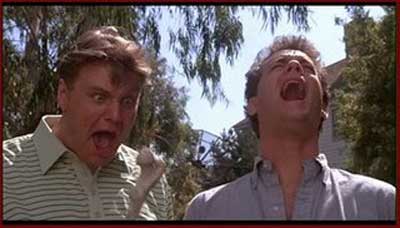 Horror is not only cleverly displayed within the film along with mystery and black comedy, but some of the classics are even paid a tribute to as well. The nineteen seventy seven classic, The Sentinel is mentioned in a story that Ricky shares with Ray and Art. Ray flips through the channels of the television and we get visual on-screen samplings of Race With The Devil, The Exorcist and The Texas Chainsaw Massacre part Two. Nightmares are delved into and Satanism even makes a small appearance within the film. Also, the local urban legend ( Skip, the ice cream man that butchered his family with an ice pick) is taken on as well.

This film is one that is basically a fun (and believe it or not, suitable) film for the entire family… and I really mean it this time. I’m not just joking around, like I usually would be with a statement such as that. There is no Gore Score, because there is no violence. There are some bruises, blood stains and bones, but that’s about it. The film is rated PG. It doesn’t have to always be rated R to be entertaining Horror… although, it is usually what I prefer… This is the one of few exceptions (especially with such brutal comedy added as well). Green sky at warning… “Neighbor take warning, green sky at night… Neighbor take flight.” 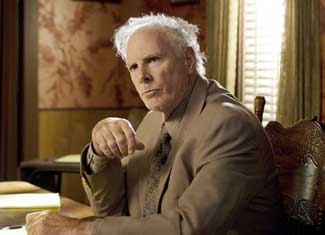 All in all, if you have not seen this film, you don’t know what you are missing. It is a Horror comedy that unlike most that fail to get it right… stays realistic, horrific and funny all at the same time and rolled up into one package of horrid hilarity. I give this film, The ‘Burbs, FOUR (BLOODLESS) HORNS UP.