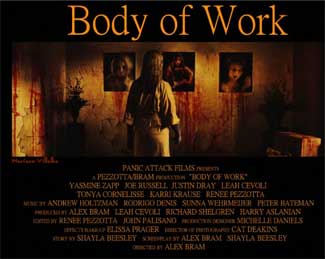 “Body of work” is a 23 minute short film project released by Panic Attack films and directed by Alex Bram. The short is professionally done with a talented group of actors and some cool special fx. A personal highlight for me was the excellent score titled “Lighthouse” than ran within the film. The music composed by Kimberley Dahne combines an excellent use of strings and orchestration giving it an almost “Batman” meets horror kind of background to the piece. The IMDB credits list music by Peter Bateman, Rodrigo Denis, Andrew Holtzman, Sunna Wehrmeijer….. so I’m not sure which portions belong to who., but none-the-less it’s a soundtrack that I’d buy.

“Body of Work” is short but effective. Often with these kind of projects I can easily imagine them showing up in a anthology or extended into a full feature. I’m not sure this one could be extended without prolonging the inevitable but it does carry weight like pieces you might see in the old “Night Gallery” episodes. With that being said I found no faults in the piece at all. It’s smart, to the point and has a nice use of framing camera work. Also the FX were used wisely that is comparable to say an episode of “Supernatural”

Our story begins with one loner artist named Jack Vogler who has hired a model to pose for his paintings. Not the first, Haley begins to feel like she is being watched by previous portraits. Jack who has no patience insists she sit still and reframe from conversation. Though it’s clear when she’s asked what is missing and he responds with agony…what his intentions are. For Jack, these painting are more than “just” projects. They are the souls of his models finished off with a portion of their blood mixed into the final pieces.

Jump forward 10 years later as new homeowners Mark and Carly move into their new residence. The house formerly owned by artist Jack Vogler comes with a few leftovers ….mainly his art pieces. As they are unpacking they discover the paintings lying in storage. Soon after hanging them up they bring a friend over to appraise them and critique the art.

Well although they introduce a rather grim presence into the house, they seem to work well enough to be left hung on display. This of course is when Carly starts to encounter spirits from the beyond. These ghostly ladies come not to haunt but with to deliver a message. “Save yourself” they mutter, but the message is ignored in place of the reality of a few ghosts stirring around the house. Where is it all leading to? You’ll have to watch to get the full story. 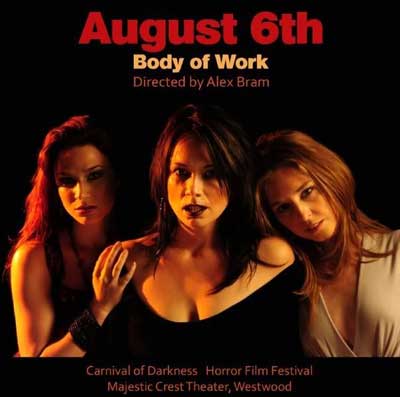 Actors include: Yasmine Zapo as Carly, Justin Dray as Jack and Joe Russell playing the role of Mark. Sometimes your in a mood for something shorter to get to the point and “Body of Work” does just that. Impressive with a dynamic eerie atmosphere. I liked this one and think you all will too!

More info you can go to www.panicattackfilms.com/