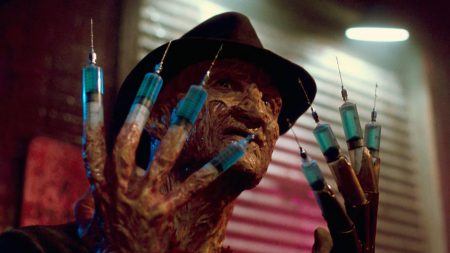 You know that feeling you get when you pull the trigger of the shotgun you had pressed against the gnashing teeth of a zombie and his brains blast out the back of its skull with a clap of thunder and flash of lightning and you mumble under your breath the greatest thing anybody could ever have said and it only works in that exact situation but the only people around to hear it are either shambling towards you to devour your flesh or a pulpy pile of intestines you keep stepping in?

I think everybody has been there at least at one point or another. It seems like the more f*cked up a situation is, the greater the dialog, hence horror movies being the perfect catalyst for spoken gold. Be it funny, insightful or just plain awesome, these are my personal favorite horror movie quotes.

A Nightmare on Elm Street (1984)
Ambulance crew member: “We don’t need a stretcher in there. We need a mop!”
Johnny Depp turning into a fountain of guts was pretty great but the insensitivity of the ambulance crew was just f*cking hilarious. Could you imagine working with these guys? I bet they’d be awesome in the beginning
stages of the very real zombie apocalypse that’s just around the corner.

Halloween (1978)
Laurie Strode: “It *was* the boogeyman.”
Dr. Loomis: “As a matter of fact, it was.”
Dr. Loomis has got to be one of my favorite horror movie characters ever created. He has dealt with the Devil for so many years that he is completely desensitized to the terminology he uses with Michael Myers and is constantly and casually tossing out words like “boogeyman” and “pure evil” despite the utter fear and trauma of the others around him.

Army Of Darkness (1992)
Ash: “Well hello Mister Fancypants. Well, I’ve got news for you pal, you ain’t leadin’ but two things, right now: Jack and sh*t… and Jack left town.”
Bruce Campbell is pretty much the king of awesome in my book. His macho delivery of cheesy one-liners in the most inappropriate situations can only be rivaled in greatness by my constant drunken shouting in nice restaurants. We are both just so great.

They Live (1988)
Nada: “I have come here to chew bubblegum and kick ass… and I’m all out of bubblegum.”
For being one of the craziest movies to come out of the weird-ass, 1980s horror genre, They Live had some moments of pure beauty. It takes almost no time for Rowdy Roddy to go from a confused bum to a shotgun toting alien killer with a penchant for insulting his ammo recipients.

The Texas Chainsaw Massacre II (1986)
Choptop: “Peel that pig and slice him thick.”
Again, Choptop is towards the very top of my list of greatest characters ever vomited from a psychotic movie makers head. The craziness that pours from his rotting mouth is the essence of perfection as far as I am concerned. His relationship with Leatherface was pretty damn entertaining too.

Dawn Of The Dead (1978)
Peter: “When there’s no more room in hell, the dead will walk the earth.”
I think the idea of there being enough dead sinners to fill hell and overflow into our mall parking lots to torture those left behind is one of the greatest excuses for a zombie apocalypse. One thing I really like about Romero’s zombie movies is the lack of real explanation for the situation. I know satellites and space radioactivity are mentioned throughout but the superstitious logic just sat very well with me.

An American Werewolf in London (1981)
David: “I’m sorry I called you a meatloaf, Jack.”
The fist time I saw Jack mangled and nonchalant I knew that this movie was going to be the f*cking bees knees, when I realized that every time you see Jack thereafter he would be a little more decomposed and pissed off I was in love. The friendly relationship between mangled ghost and werewolf in denial was as refreshing as downing a freshly opened bottle of whatever the hell is closest.

Dracula (1931)
Dracula: “I never drink… wine.”
Is there anybody cooler than f*cking Bela Lugosi? Seriously. Everything Bela said as Dracula is still some of the best delivered dialog I could ever think of. He is absolutely the epitome of cool and if you don’t agree then you are wrong, …dead wrong …and stupid.

Freaks (1932)
The Freaks: “We accept her!”
This is one of the greatest classics out there. It is as heartbreaking as it is awesome, though, and this chant leads up to the emotionally charged climax. I felt so bad for the freaks in this dinner scene but loved the following play out that resulted from it.

Re-Animator (1985)
Herbert West: “You’ll never get credit for my research. Who’s going to believe a talking head? Get a job in a sideshow.”
H.P. Lovecraft is one of the most amazing minds to ever be and this movie, being a spawn of his idea and a work of camp and comic genius, just pushed his story to the max. The movie itself is brilliant and Jeffrey Combs’ delivery is classic.

Shaun of the Dead (2004)
Ed: “Who died and made you f*cking king of the zombies?”
I could have done the entire list of only Shaun Of The Dead quotes but decided on some variety instead. Still, out of the entire movie I think this is my favorite line. This is one of my top movies of all time. The chemistry between Shaun and Ed is so perfect and the situations in the movie open the gates to an onslaught of opportunity for amazingly perfect dialog and action.

Well, again I have done an amazing job. You don’t even have to say it, I know you idolize me and I have to tell you, I’m not surprised. I may have rugged good looks and the necessary skills to keep the ladies alive when the dead begin to rise, but you have to admit my ability to spit out a mean column is by far beyond perfection. Would it impress you even more to learn that I had written this while insanely intoxicated?