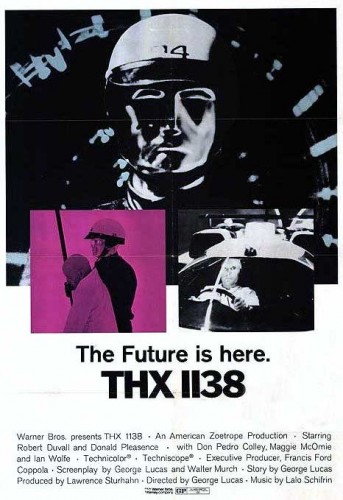 “George Lucas adapted this, his first film, from a short he made at University. THX 1138, LUH 3417, and SEN 5241 attempt to escape from a futuristic society located beneath the surface of the Earth. The society has outlawed sex, with drugs used to control the people. THX 1138 stops taking the drugs, and gets LUH 3417 pregnant. They are both thrown in jail where they meet SEN 5241 and start to plan their escape.” (courtesy IMDB)

THX 1138 (1971) is an early work from filmmaker George Lucas, who has since earned a permanent place in the history of cinema with his creation of Star Wars IV: A New Hope (1977) which, at the time, became the most successful film ever. George started work on THX 1138 when he was still at the University of Southern California film school. With the help of other students he made a fifteen-minute short film called THX 1138:4EB (1967) which subsequently won a number of awards. He then won a scholarship from Warner Brothers to observe the making of Finian’s Rainbow (1968) which was being directed by Francis Ford Coppola, another young filmmaker only a few years older than George. The two became friendly and George worked as Coppola’s assistant on The Rain People (1969). Coppola had somehow persuaded Warner Brothers to allow him to set-up his own production company called American Zoetrope, with which he proposed to produce high-quality low-budget features. One of these was THX 1138 which George based on his student film but, despite some positive reviews, it did so badly at the box-office that Coppola was faced with financial ruin until the success of The Godfather (1972) saved the day for him.

The plot of THX 1138 will be instantly familiar to any science fiction reader. It concerns a totalitarian subterranean society of the future run by computers in which bland human technocrats act as both supervisors of the machinery and supervisors of each other. Everyone is fed a constant supply of sedative drugs (failure to take said drugs results in prosecution for Drug Evasion) and any sign of individuality is forbidden. Everyone wears the same white clothing and all heads are shaved. This uniformity also helps blur the differences between the sexes – good thing too, as sexual intercourse is also forbidden, with all breeding done through cloning and artificial insemination. 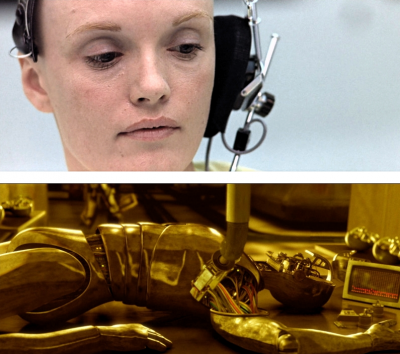 After a brief prologue consisting of scenes from the old Buck Rogers movie serial, George begins THX 1138 with a sequence of apparently unrelated visual fragments accompanied by snatches of jumbled sounds and dialogue: A woman opens her talking medicine cabinet which tells her which pills to take; Robot policemen on the job politely arresting people or helping small children; Drugged technicians hunch over their control panels manipulating highly dangerous radioactive materials; Supervisors hunch over different control panels chatting about casualty rates from the latest industrial disaster while instructing people to work faster and avoid accidents (the technicians are so out-of-it that accidents are unavoidable, but if they weren’t on tranquilisers they wouldn’t dare do the work they’re doing). All these elements gradually coalesce to form a comprehensive picture of THX’s world.

The film’s central character is THX (Robert Duvall) who suddenly finds himself aware of the emptiness of his existence after his wife/room-mate LUH (Maggie McOmie) deliberately alters his drug intake. He also discovers sex and love and, before long, LUH is pregnant. They are both arrested by the robot policemen (tall black-clad figures with chrome-plated heads), put on trial and found guilty. LUH is terminated and her code-name passed on to a bottled embryo, while THX is thrown into a prison which consists of nothing but an endless sea of white. In here he encounters another would-be rebel, SEN – Donald Pleasance reprising a role he played in both the television and film versions of Nineteen Eighty-Four (1956) – and eventually the pair of them escape, accompanied by a large black man who declares he isn’t real but is just a three-dimensional hologram who has chosen to escape the entertainment circuits. The three of them later become separated: The hologram man is destroyed in a car crash; SEN makes it to the boundaries of the city but is so frightened at the thought of having to cope with the unknown world which lies beyond that he returns and allows himself to be recaptured; THX finally succeeds in reaching the surface and freedom, though one is left wondering if there is still any place in the world to escape to.

With its meticulously grim creation of an utterly depressing world, THX 1138 might seem an unlikely film to have come from George Lucas, who has since demonstrated that his cinematic forte lies with films that exude juvenile exuberance like American Graffiti (1973) and Star Wars, but on closer examination it ain’t necessarily so. I had the opportunity to ask George while on the set of Star Wars (I was truly heartbreaking as the remains of Aunt Beru, if I do say so myself). George told me, “It’s all the same story. THX 1138 was allegory with a touch of cubism, American Graffiti was sociology plus nostalgia, and Star Wars is total fantasy, but all three films are about me. I identify totally with THX struggling out from a benevolent and disintegrating environment. I used to cruise around like the kids in American Graffiti and now, with Star Wars, I’m on an intergalactic dream of heroism. I’m telling the story of me.”

Two-thirds of the way into THX 1138 the whole mood of the film suddenly changes at the point where THX and SEN meet the hologram man, and from grim reality we are plunged into exhilarating action as THX proceeds to outrun, out-drive and outwit his pursuers. Another Star Wars seed in THX 1138 is the obvious fun George has with robots. For all their apparent efficiency, they’re far from perfect, and their foibles provide the film’s main source of humour, culminating in the final sequences in which the robots are unable to continue chasing THX because they’ve exceeded the total budget allotted for his recapture: “Please come back, we only want to help you.”

THX 1138, like Star Wars, is fun but the difference is that it pretends to be profound as well. Throughout the film George’s imaginative visuals continually impress, but by showing us how lifeless his future world is, he almost puts us to sleep – which is why we’re so grateful for the lengthy old-fashioned chase at the end. I also wish George had put a little more thought into why sex would be a threat to a totalitarian society. Aldous Huxley’s Brave New World, in which there is so much government-encouraged sex that no-one ever connects sex with love, is perhaps more frightening than the future George presents us. Hold that thought while I take this opportunity to profusely thank Rolling Stone Magazine #246 for assisting me in my research, and I’ll ask you to please join me next week when I throw you another bone of contention and harrow you to the marrow with another blood-curdling excursion through the darkest dank streets of Hollywood for…Horror News! Toodles! 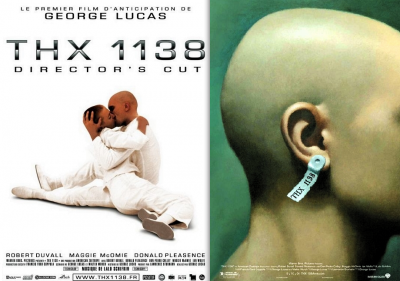