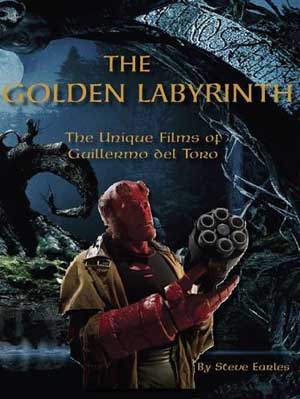 If you’ve been paying attention in the past few years you of course have heard the name Guillermo Del Toro becoming a main stay in the film industry. Much like Peter Jackson, Guillermo has worked is way up thru the chains by providing an eye for detail, conceptualization and being in the right places at the right times. Any working director is at the mercy at the content they produce and the chances they take. Del Toro is unique in that he has vision that he is able to convince others to buy into, create and make into reality for film goers. This of course is a good thing as he has produced and directed some of the most compelling film pieces to come out of Hollywood. The book “The Golden Labyrinth” is more or less a celebration of all things Del Toro. Equipped with full color lavishly brilliant photography and film stills it makes for not only an interesting read but a great film collector’s library addition.

Coming off the assembly line at books printed by Noir Publishing in the UK, it’s easy to say that their volumes never disappoint. Pages of semi gloss paper and a design that carries from one page to the next provides the makings of a great read, in my opinion.

To carry forward, the book focuses on the fantastical films that have graced our livings rooms from the mind of a prolific artist and visionary. To be more precise, they include the productions of “Hell Boy” “Mimic”, “Pan’s Labyrinth”, The Orphanage”, “Cronos”, “Devil’s Backbone”, “Blade 2” and the most recent “Hellboy 2”. With his biography of work still being somewhat small in comparison to other film directors…the strength is in the pudding. We can feel and experience his growth thru the productions and see that we have truly tapped into something special. As the book documents each production, there is surprisingly alot that is presented as storytelling.

The storytelling is not so much a review as it is a recap of each of the films in full spread over several pages. On one hand, readers might skip some of these sections to get into the more Del Toro specifics or indulge into the narrations to grasp the interpretation of the author. We quickly learn that there are specifics that seem to find there way into the Del Toro films. Themes that deal with nazism, fantasy, storybook sci-fi, mythology and classic renaissance even at times are traits that have come to be easily recognizable in his films. The nazi correlation is in fact probably most prominent in my mind. And yet it does so by intertwining it within fantasy elements. A strange mixture that of course uses the nazi’s as a personal of evil and evil things.

Del Toro revisits his love for spanish civil war by story ties ins and metaphorical approaches to subject matter. “The Golden Labyrinth” helps define alot of that for you incase perhaps you missed is at the gate. Though its no wonder that the real monsters of “Pan’s Labyrinth” are humans and the creature assumed ones are only provided thru the fantasies of a young girl.

While this trait is one of the more obvious, there is much still to be read into the analysis of his films. Hell Boy perhaps contradicts alot of the assumptions we’d make as viewers. Our main character who is just a working class man / beast who happens to fight monsters….. is void of sensationalism, and extreme emotional spats. Rather he does his job, accepts who he is and tries to make due in world that treats him foreign. Details about the film and it’s production history reveal the initial struggle of selling a comic book character movie and the persistence to keep Pearlman as the only choice that makes sense for the character. Times of course are different now, but there was a time when comic book adaptations weren’t received with open arms.

Let’s talk about the Del Toro characters……… How about those strange things that fall into a combination of middle ages, folklore, nightmares and a tip of hat maybe even to Jim Henson? These images are usually the money shots that keep us engaged even if the stories fall away from the creatures themselves. Hell boy 2 sings easily with the tune of “all things Del Toro” introducing a solid viewing time of engaging eye candy and beasts from unknown realms. While this statement has nothing to do with the book ….I would love to see Del Toro take on “Dante’s Inferno”

Within the pages, productions are analyzed and callouts dig deeper into the mythology aspect of them. In Mimic we learn how Del Toro was unsatisfied not only with his own results but with he way the studios downplayed the film. Even going as far as to keep his name off the marketing aspect. I for one really didn’t know this was one of his films up to this point. What is important though is that he has prevailed and gotten the chances to really soar with his visions.

This aspect has paved the way for much more to come. The book is as comprehensive of Del Toro as I’ve yet to see, and fans of the films will get a thrill out of the 200 illustrations, rare photographs and insightful text thorough out. Highly recommended as a fine film and fantasy – profile book!