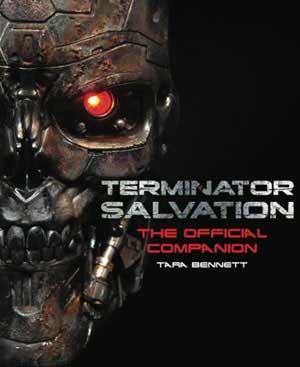 The year is 2018 ……coming off the huge franchise undertaking, Terminator Salvation adds another chapter to the already in place trilogy. This time we see the effect of skynet on the world after the end of days. We meet the 30-ish John Connor and his father from the past younger Kyle Reese. We also get to spend time with Marcus Wright another character added to the mix….an originally human turned cyborg who was created by Skynet to infiltrate the Rebellion.

For anyone who has seen the film knows already what an undertaking this particular film addition is in terms of visual dynamics, story and entire world creations. The book in review is “Terminator Salvation – the official movie companion”by Tara Bennett. The book is chock full of lavish illustrations, photos and imagery. As expected we see alot of the work, and pre-work for that matter that went into the filmmaking. We also get a helping of back stories along the way.

A look into the table of contents spells out the amount of content provided. We are taken from pre-production to design and even the process of building the Terminators . In this film, we don’t just get one but several models and types of machines created in the world of Skynet. The author also digs into the sets, the stunts, the cinematography and the visual FX.

As any film this big in terms of financing it takes alot of convincing and re-working to get all the piece sin pl;ace. This also includes the massaging of actor Christian Bale, a prime choice intended for the screen adaptation. Coming off of the Batman franchise, we find a reluctant Bale who is already supporting one franchise and needs coaxing to get the film where it needs to be to his attraction. So with the pretty pics we get to ride along in the narrative of how it all came together.

Tons of great Terminator parts photos! Exo-skeletons, head closeups, models, variations on parts and the FX team in production. It’s hard to imagine so much painstaking detail work that went in to make the parts and sets so realistic by painted on distress and age abuse. In fact its pointed out several times that the direction of the film required as much practical effects as they could pull off “without” CGI. Mainly to add a sense of authenticity to the look. CGI was used but only in portions that couldn’t be pulled of with real world creations.

The concept renderings provide a nice warm up to the final realizations that are seen in the movie. We have a nice chapter even on the costume designs. Which simply started with a digitally made up photo of the actor to build a base concept and then the final photos of the costumes used in the film.

Tons and tons of concept art are provided that helped to visualize the set and level of design needed to create this post world environment. Each major actor is photographed and profiled. So you get a full overview of the characters from the film with healthy descriptions of there purpose and some good tidbits to digest.

Author Tara Bennett does a great job at compiling all this stuff for the fanboys and fangirls out there. The book looks excellent!….and Titan of course rocks the house on visual book releases. There’s no shortage of photography documenting all the processes involved that makes for an eye catching release for Terminator fans. This is in fact 1 of several being issued for the “Terminator Salvation” movie series so get em while they are hot! 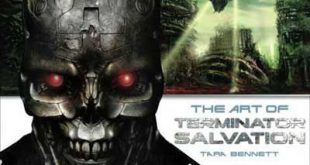