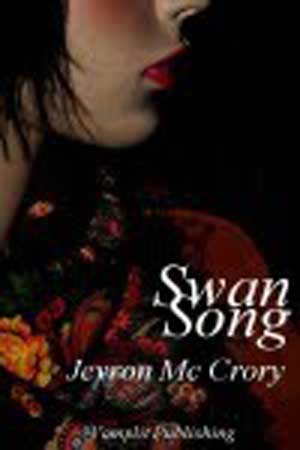 I have a confession to make. When I started reading Jevron McCrory’s aptly titled novella Swan Song, I wanted to hate his protagonist. That’s not the confession. Nor is it a slam against McCrory’s writing. McCrory brings the character of Lewis Morrison, Swan Song’s male lead, across in vivid detail with a few well-chosen words. It just so happens that Lewis is a jaded, often drug-addled man with a tendency to act the ass. In fact, he’s exactly the sort of fellow readers love to hate. And I would have loved to hate him too.

Here’s my confession: I couldn’t do it. No matter how much I wanted to loathe Lewis, McCrory wouldn’t let me, damn it! Despite his myriad flaws, Lewis is just too human to hate. With subtle brushstrokes that at first are nearly undetectable, McCrory paints layer upon layer of complexity around Lewis until he emerges as a multifaceted figure just this side of tragic. Indeed, by the end, McCrory has given us enough glimpses into Lewis’s humanity for the reader to recognize him as Everyman on a bad day. A very very bad day.

Sent to write a review of mysterious beauty Katrina Collins, whose bewitching melodies are stealing the music scene club by club, Lewis expects to be bored by another warbling wannabe. He does not expect to pass out, swept into unconsciousness on the young woman’s song. Nor does he expect to find himself gripped by an inexplicable obsession with Katrina.

As Lewis, despite his professed anger, is drawn ever more powerfully to Katrina, everything he knows about sex, love, and life is turned upside-down. And for those of us along for the ride, the notion of the warm and fuzzy—er, make that cold and fuzzy—romantic vampire is turned on its head as well. McCrory’s vamp is the undead parallel to a jungle cat: alluring, majestic, and compelling, to be sure, but not a creature with which you’d be advised to cuddle up. Assuming, of course, you like your blood vessels unmolested and your internal organs … well … internal.

This is not to say that the human elements within the beast are left unexplored. McCrory has an excellent grasp of the range of human feelings. In the short space permitted by the novella format, he wrings anger, pain, lust, happiness, sorrow, and more from his characters, taking the reader on an emotional thrill ride. Although there is not time to spell out each character’s motivations for every action and decision, we feel close enough to the characters that such revelation is unnecessary. We sense that this is the way in which the character should behave, and that is enough. The hints and intimations that we receive throughout tell enough to flesh out the back story, but to think our way through the narrative is to miss the point. McCrory’s tale is best simply experienced, on a visceral level, the way Katrina’s spellbound audiences experience her music.

My one complaint, if it can be called such, is that Swan Song is over so quickly. Though its brevity lends it the breathtaking capacity of a swift punch to the gut—or should I say the throat?—I found myself greedy for just one more bite. Those who enjoy a juicy vampire tale will probably feel the same way. There’s something here for fans of the ubiquitous bloodsuckers no matter what incarnation you prefer. I like my vamps to have personality without being above getting gore-streaked and nasty. Swan Song delivers on all of the above.