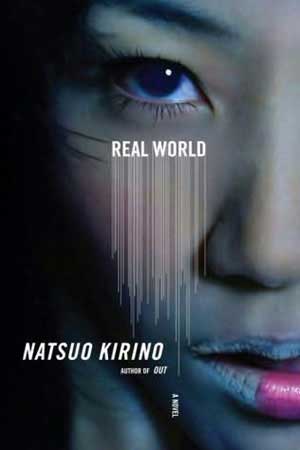 You may never have heard of thriller writer Natsuo Kirino – she’s written about twenty novels in her native language and has won just about every Japanese literary award going. Any new English translation from the author of the simply-relentless horror show “Out” is always worth getting excited about. This novel ‘Real World’ (her third to be translated into English) is about the brutal murder of the mother of the family next door in a run down suburb of Tokyo. They were always a quiet family; the dad was never there, the son went to the best school. You know, a typical Japanese family striving to do their best.

“Who would kill such a bland woman?” asks Toshi, one of four teenage girls who become embroiled in a very strange adventure as the novel unfolds. The neighbour’s son, she calls him Worm, has this weird grin on his face the day of the matricide. Toshi decides that Worm is the murderer and tells the three school friends in her ‘gang’ about it: the studious Terauchi, the ever-grieving Yuzan and sweet but precocious Kirarin.

So, what happens and why is this such a cracking novel?

Well, let’s first look at the structure – each chapter offers a fresh perspective as we view the same narrative through the eyes of the five main characters, Worm and his ‘groupies’. You know all those women who send love letters and proposals of marriage to the likes of Charlie Manson? Well, that’s sorta what happens here – Worm becomes the new fascination, the dirty little secret shared by these spoilt-brat Japanese girls bored by the songs on their mobile phones and instant internet gratification.

But it’s also about the cruelty of young women, a topic Kirino had previously explored in her whore-sisters novel ‘Grotesque’, and how the really serious rivalry between supposed friends can sometimes destroy an innocent life. So, let’s look at the horror…

‘Real World’ is a relatively tame novel when you compare it to Kirino’s tour-de-force ‘Out’, with its graphic dismemberment and disposal of the husband’s body by the gang of four women and the involvement of the Yakuza and the insidious stalker, but it has extreme moments of shocking horror and brutal violence and the gradual decline in the mental health of Worm means you’re never really sure what he’ll do next. Especially when you discover that one of the girls has joined him on his flight from justice. But which of the four? And how much danger is her life in?

Philip Gabriel has proven himself a worthy translator with his interpretations of several Haruki Murakami novels – he doesn’t try to be too funky with the hip-speak, unlike his fellow Murakami translator Alfred Birnbaum. Philip Gabriel lends ‘Real World’ just the right amount of distance from the emotions all the characters must be feeling, he shows the ‘face’ of arrogance in the face of real fear. The reader is haunted; haunted by the hopeless atmosphere of a murderer on the run: haunted by the truly awful things that you fear will happen to these kids if they continue on their insane journey.

There’s neither the gormless innocence of the kids in a Stephen King novel nor the gaudy sleaze of the kids from the eponymous film ‘Kidz’ – this book just tells the story of normal teenagers and what happens when they wander out of their comfortable affluence. You’re wondering about retribution aren’t you, and all the usual genre tropes? Well forget it, ‘Real World’ is a totally different kettle of fish and the narrative resolutions are just bizarre.