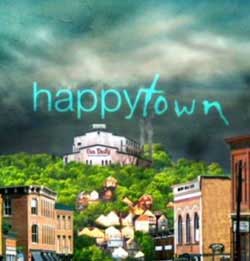 Haplin, Minnesota “Happy Town” is approaching five years of peace after being riddled for years by unsolved kidnappings. But, in the wake of this small town’s first crime in five years, some dark truths are being revealed about some familiar faces. They say every town has its secrets… that doesn’t even begin to describe Happy Town.

At the time of this review, the series which was looking to be a hopeful and interesting new offering to our nightly viewing, has been canceled even before it was able to ride out its final episodes. 8 to be exact which center around a town of Haplin so called in a sarcastic tone as “Happy Town“. This thriller and drama series often took a more down to earth tone as previous like series such as David Lynch’s “Twin Peaks”. It has gotten to the point that even new series that offer a take on the bizarre and criminal often are pulled early on in their first season. Happy Town may have started slow but upon completion it really had a unique spin that could have been great. As of June 2 it was reported that the series was going to finish its season and then forgo renewal. Then in a further act of ignorance the series that relied on an ongoing mystery to be solved was reported that it wouldn’t air it’s 2 remaining episodes. Are you kidding me??? ABC sites bad ratings which in today’s market mean instant death regardless of completion. Too bad, I was one of the actual watchers and this show really started to grow on me. 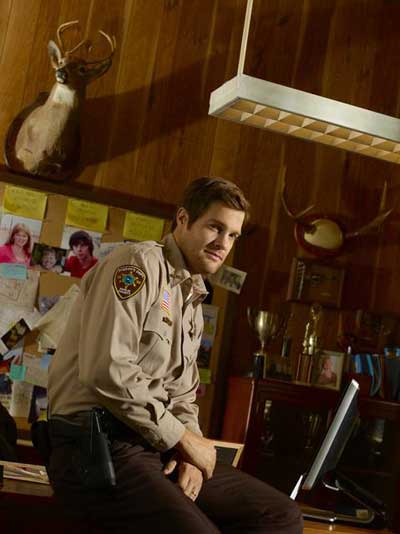 Well outbreak demanded a resolve and in an act to tie up lose ends the series was then again announced that its final 2 episodes would be available online. Whew…. at least those who did watch it can sleep better now and complete the time that was invested already. My assumption is that it will also quickly go to DVD like the failed series Harpers Island did. Though in that case, the pulling of that nowhere show was a good move. Happy Town was created by Josh Appelbaum and is actually one of the new offerings of tv series that are based on dark content and the mystical. The series was greatly enhanced by the stunning acting work of Sam Neill who brought a certain charm and dark mystique to his role as the shop owner.

The show itself revolves around a series of disappearances that have occurred in the town in conjunction with a mysterious endgame of a villain named “The magic man”. The term was coined in his ability to make people disappear without a trace. Though as cheesy as the name might be, it started to sink in after a while and really help the show build upon a common underlying theme. In addition as we get to know the towns folks we are given a gaggle of back stories and suspicions that make several seem to be worthy candidates as potential suspects in the case.

As the series unrolled, we also found out that the happy folks of Haplin were in fact not as cheery as you’d expect. A convict released, a strange store owner who sells old movie memorabilia to a town that most likely wouldn’t have any interest in, a factory owner with a dark past, a mysterious FBI agent who rolls into town using very peculiar and off the book methods in the case. If that’s not enough then we have a wild bunch of backwoods junk yard owners who are just bad citizens from the start, a sheriff who has gone into a coma and chants weird dialog that he can’t remember saying, a young girl who is there to dig up dirt on something specific and shady. 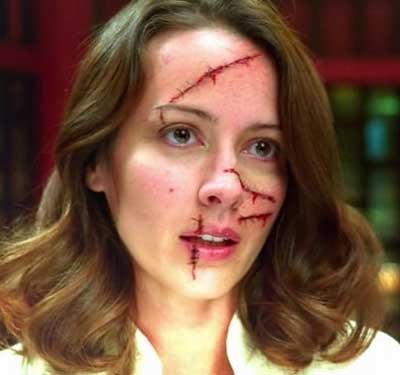 Well that’s just a taste. Meanwhile the sheriffs son Tommy Conroy played by Geoff Stults is the white hat of this series as he quickly raises the bar from the deputy that gets picked on to the rise to the occasion bad ass now in charge. An ongoing search is underway to find the magic man, rescue the kidnapped and prevent this figure form taking any more bodies into this realm. With the smell of bread lingering over the town from the local factory the town had begun to become a vigilante model in itself. 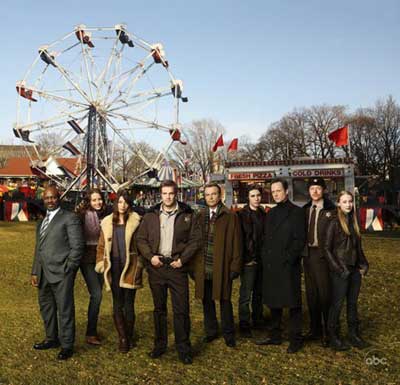 The show carries forward with raising suspicion on several occasions and keeping the identity of the magic man surrounded in mystery almost like a urban legend without a face. Peggy Haplin is the local rich snob who also seems to play dark games by keeping control of the town and its residents.

Happy town takes a bigger premise and fills in the gaps with smaller subplots within that keep the characters of this series interesting and moving forward. Too bad there wasn’t enough magic to keep this one on the air as I really enjoyed it for what it was. Heck its better than drowning us in more ghost hunting shows right? 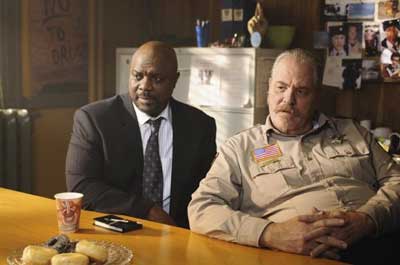