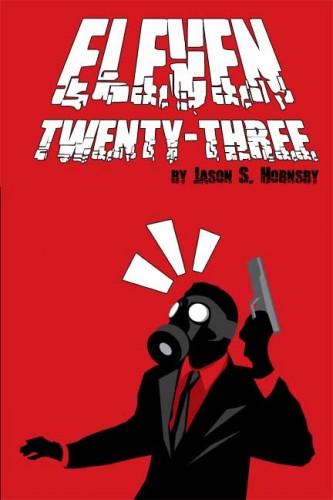 I read a wide variety of independent fiction. I’m addicted to it. I have stacks and stacks of independent horror, zombie, and bizarro books that could really cause physical harm if they tip over. These books entertain me, they entrance me, they inspire me, and they are my escape. There is one thing that none of them have done yet though. As someone who reads dark and writes even darker, I don’t scare easy. All that being shared, I can say honestly Jason S. Hornsby’s new novel Eleven Twenty Three terrified me. Perhaps I was a little paranoid to start with and can only blame Jason Hornsby with pushing me over the edge with the thick moody slab of horror known as Eleven Twenty Three. Either way there is no denying the feeling of paranoid terror that seeps from this well crafted novel.

Eleven Twenty Three opens with the main character, Layne Prescott, and his girlfriend, Tara, sitting at an airport bar in Shanghai. They are waiting for their flight back to Lilly’s End, Florida and the funeral of Layne’s father when Layne makes eye contact with a man across the bar from them. The man is sweating and nervous looking with a briefcase handcuffed to his wrist. Within the first few pages Mr. Hornsby builds a mood of paranoia and foreboding that just gets thicker and thicker. Through a turn of odd events Layne ends up with the briefcase; finding it just as they reach Lilly’s End.

Mr. Hornsby takes his time and builds his characters through-out the first few chapters but the story and mood doesn’t sway and the feeling of dread is almost palatable as more characters are introduced. We met Hadjime, Layne’s equally cynical and paranoid best friend, and his sister, Mitsuko. The plot layers into the characters life and they are all dealing with very human issues that make the building terror even that much more real. Layne for instance is not only dealing with the death of his father but also a complicated relationship with Mitsuko. Amidst all the drama the terror emerges in brutal fashion.

Layne picks up his mother for the funeral of his estranged dad and at the grave side chaos erupts. As the clocks strike 11:23 half of the population of Lilly’s End go completely unexplainably and, worst of all, viciously insane. The people that don’t turn insane are attacked by their friends and loved ones; finding themselves having to kill or be killed. The funeral party turns on each other with incredibly gruesome results. The violence is sudden, vivid and highly emotional as the family tears into each other like rabid animals. During the funeral party battle royal gunshots and sirens are heard from all directions adding to the panic and chaotic scene. After a few minutes the people that went insane (the ones that didn’t kill themselves during their fits of violence and bloodshed) turn back shocked and confused by the gore of death all around them. Once the sudden destruction ends the town finds themselves blocked off at all exits by soldiers that shoot to kill.

Layne and friends are left to work the mystery of the briefcase, the ominous chemtrails in the sky above them, and the violent fits the town’s people experience at every 11:23. Conspiracies and paranoia run rampant as the cast of characters grows ever smaller every twelve hours working towards a conspirators dream ending.

I enjoyed Eleven Twenty Three immensely and count it on my top ten of the year. This novel is creepy and dark with enough smart dialogue to keep your brain working as the violence engulfs you. Highly recommended to fans of dark fiction overall. If you enjoy real paranoia and great violent terror you’ll love Eleven Twenty Three, even if you never leave the safety of your house again. 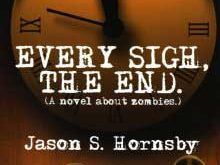