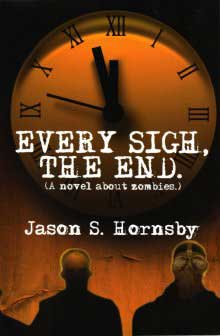 “In a world so stupid, so mesmerized by dancing clown politics and horrified by the tortured innocents who finally succumbed to years of brainwashing by taking down thirteen or so bastards in a Midwest high school, something like a hundred living dead attacking a New Year’s party full of unimportant, nameless young people who probably f*ck, smoke pot, and who will not vote in the 2000 election can easily go unnoticed. We can, apparently, contribute nothing to this society, except entertainment for the masses as we die slow, excruciating deaths.”

Repeatedly, I have made a point to mention how bored I am with the whole zombie thing. Then a good friend dumps a huge bag of zombie fiction on me, specifically telling me that I have to have to have to read this book specifically. He normally has good taste and I want him to stop bugging me about it, so I relent. Next thing I know, I’m neck deep in it, thanking whatever apathetic deity is out there that the people at Permuted picked this up (especially after the disappointing and ultimately so utterly boring that I couldn’t bring myself to finish it experience of David Wong’s John Dies at the End). As melancholy as it is hateful. Misanthropic. Nihilistic. Fatalistic. Paranoid. A direct assault on our society and ourselves. Admittedly a tad pretentious. Damn did I get a kick out of getting my brain munched on by this asshole.

Have you ever looked at the people around and seen nothing but vapid emptiness? Do you find yourself floating through life on inertia alone, too f*cking bored with everything to bother doing anything? Do you hate your life, your friends, your family, your lover and the whole spinning mess around it with a detached passion bordering on mania? Are you waiting with bated breath for all of it to go up in flames because, frankly, it needs to? Do you keep catching people watching and filming you out of the corner of your eyes? Welcome to the life of Ross Orriger, an aimless drifter through a purposeless existence who spends his time between his cheating girlfriend, his own mistress, a best friend that may well be one of the bigger d*cks on the planet and dubbing grotesque movies he can’t stand to sell to people that disgust him. Now it’s New Year’s Eve, 1999 and change is coming in the form of the shambling, rotten masses that are trudging toward him as we speak.

I know plenty of people that would giggle at the idea of intellectual Zombie fiction (people who never bothered to think about the ramifications of Romero’s work or that bewildering bit of genius, Shatter Dead), but that is exactly what Jason Hornsby is aiming at here: a Zombie tale that will force the intellectual elite to recognize the phenomenon as a legitimate cultural movement. All of the crap that English majors and professors get off on is here. The narrative is temporally fractured, there is both a story within and without the basic plot and there is an admirable philosophical and intellectual depth to the precedings. Writing students and teachers will also get a kick out of the running gag every time someone sighs, such an unoriginal gesture.

Luckily, for people that care more about the actual story than the author’s navel-gazing (I’m split between the two), this is all held together by the visceral honesty and rage that is so integral to this tale. I am quite sure that Jason Hornsby really and for true hates us all and wants to see the world go up in flames or at the very least he is damn good at convincing us that his protagonist does. This vitriol is balanced out with a marvelous sense of wit and dark humor and, oh yes, blood. This is a novel about zombies after all, and no zombie story can exist without gallons that red, red kroovy, loops of blue intestine and grey, chewed up meat. Somewhere in there, he even managed to get me concerned about the perpetually complaining protagonist (I wouldn’t dare call him anything as grand as a hero).

The bad thing here is that the intelligentsia Jason seems so eager to address will likely never sully their hands with something as trite and common as a zombie novel and many zombie fans will be put off by the pretentiousness that he can’t quite seem to keep completely under wraps. All I can tell either group is to give it a shot anyways, since you’ll be missing a hell of a novel, one that manages to bring together the work of Romero and Max Brooks, 28 Days Later and a bit of The Truman Show, if you pass this by.

“What is the Apocalypse for us may only be a minor inconvenience for a race of living cannibalistic corpses, waiting patiently to move into our houses, cities, and world. And then, once the last of our bones are devoured or thrown into piles and buried, never to be spoken of again, the Earth goes back to business as usual.” 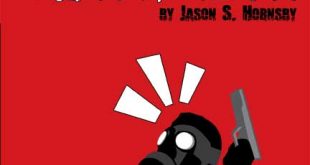