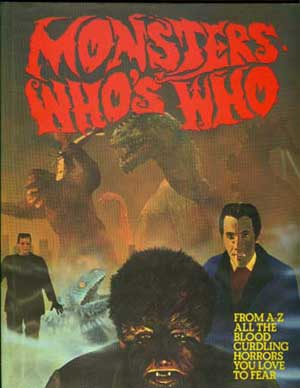 I’m gonna take ya back with this one, way back. In fact I recently dug this out of my garage which was in storage for awhile. Published in 1974, I was only a kid when I picked this up. In fact it still sports the Walden books sticker for $3.95. Still a big spend for me back then. Now you’d probably figure that a 1970s book sporting monsters on the cover would tell all kinds of tales about Texas chainsaw and other goodies from the horror days? Well not so fast.

This book I wont pick on as you have to consider the times were different back then. The kind of books we have now were no where to be found on the most part in horror collection books. Maybe this one was just meant for kids …I don’t recall. Though the publishers decided that what monsters meant was alot different than what we would assume. For instance while there is plenty of coverage of Frankenstein, Dracula, the creature, the blob, and related movie monsters…..they also lumped in comic book villains, comic book heroes, mythological monsters, lizards, dragons, dinosaurs, Spiderman, Star trek and a menagerie of creatures you’d find in the “Clash of the Titans” movie. Quite a mix indeed. Because of this its hard to take this volume seriously as a choice horror book release. Though it does sport alot of killer color photos. So you might be compelled just for that reason alone.

I remember quite well before the Internet and several horror magazines on the shelf, a cool picture of Kind Kong, Gorgo, The Wolfman, Phantom of the Opera and others was a treat. What wasn’t in print was only on TV and that itself was only when the films played. So souvenirs were a pretty good catch to drool over photographed movie monsters Now my biggest complain really is the text of the book. Each monster is summarized but in a very dictionary and quick overview kind of way. No real facts of interest, no behind the scenes, no real background except the assumed description. Ok, well most are that way. When you get to the Yeti (a supposed real monster) you get the 3 page of research data.

In essence, the book lacks balance and is written somewhat generic. Still with all that said I do have to confess I cherished it for what it was at the time. I’d wake up look at the pictures…think about how cool these things were and do it again the next day. Good thing books have progressed for us but this one still stands as an old school classic in my book. The book doesn’t list any authors on the cover and simply states its publisher “Crescent”. The photos range from black and white to 2 color duotones with most of the full color pics going to the comic book pages. Not bad for $4 though surprisingly you can still find this available on Amazon from used sellers for under a dollar. Ok, maybe not a collector item but a good look at the published monster works of the 1970 era.

Tags Dulan Barber Monsters Who's Who