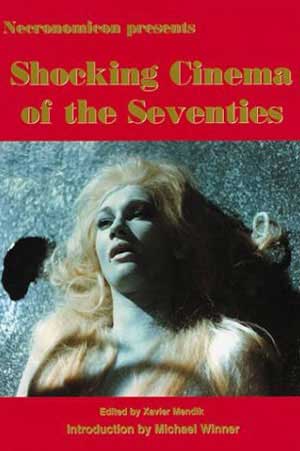 The Seventies were a cherished time for movie watchers and film makers. Alot o important pieces came out that not only drove new directions in cinema but also suggested the politics and mind set of the people at that time. Famous for many classics, it broke ground with films like “Omega man” The Sentinel”, “Last House on the Left”, 2 Lane Black top”, “Dawn of the Dead”, “Towering inferno” “Live and Let die”. “Death Wish” and quite bit of others.

Mendik presents much of the information somewhere between an academic and consumer base reading style. While it can get quite wordy at times, it still retains a bit of information and historical points that most readers can dig into. It should be noted though that the book has Mendik listed as editor, which means each chapter if essentially “written” by a different author. Though the tone stays pretty consistent from author to author.

70’s Horror, I think this phrase sums it up in a nutshell. “In a period marred by real life social, political, and military terror it comes as no surprise that horror proved one of the most popular genres of the seventies. It was not merely that the decade saw an explosion of new and disturbing types of celluloid savagery, it was also the fact that these images were largely produced from he independent and exploitation sectors beyond the control of major studios. ”

This is proven in many of these releases that followed the narrative of the times while creating truly original and innovative products that live on to this day. In fact, I always bring up that question to others. Why is it that many diehard horror fans cling to these precious few films on the 70’s rather than excepting more offerings from the modern day and age of horror releases?

Crime, politics and gender issues were often reflected in the wave of creations that came on screen. Charlton Heston seemed to be right in the heart of much as he delivered great performances in “Omega man”, “Soylent Green”, Earthquake”, and “Planet of the Apes” (tail end of the 60’s 1968). Much of this book covers thatt subject in several different film analogies. Blaxploitation has its run and seemed to also hint at the current wave of thought at that time. It is noted that many of Romero, Hooper and Wes Cravens films were an important part of the culture reflection of the 70’s It tapped into a general fear psychosis or a need to see certain situations played out in rewarding violent ways, seemed to be just what the doctors ordered for the era.

We get our share of rape, revenge films as well that are less mentioned within. The book instead of being your usual 70’s rundown of everything made in that era, prefers to concentrate on chosen few titles which are analyzed and broken down into references and plot structures. I will admit the writing at times lost me in academic mishmash that seemed to miss some of the entertainment values.

Seeing that this is no a complete horror focused read, there is much covered that deals with the legacy of 7o’s films in general. As we know that a portion of that includes the horror genre movement, there is a great deal included that “does” cover the 70’s horror genre aspects. These can be found in chapters that cover Hammer films, Wes Craven, Romero, Dawn of the Dead, The Crazies, Texas Chainsaw, British Horror, and my favorite section concerning demonic horrors and films like “The Sentinel”

In any case it’s well thought out book that digs into 70’s culture and filmmaking with intensity on the focus pieces. It features an ensemble of writers who dedicated unique chapters on every film piece covered. Plenty of B&W photos and a nice hard bound cover make for a fine book to own.