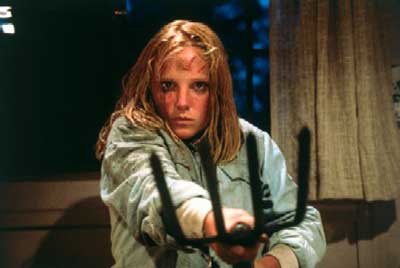 In 1980 Friday the 13th slashed and stabbed its way on cinema screens. It continued the success of slasher movies that had become a new horror trend. Films like John Carpenter’s Halloween and Black Christmas had laid the foundations for the sub genre but Friday the 13th did something that is rarely seen in horror even now some 30 years on.

Anyone knows that the film spawned a horror icon in the form of Jason Vorhees, a masked psychotic killer, wielding a machete, who cannot be killed. Jason appearred in numerous sequels and became part of culture along side Michael Myers and Freddie as the generation’s Dracula or Frankenstein.

However, in the first film Jason wasn’t the killer at all. The villain was actually Pamela Voorhees, Jason’s mother, hell bent on keeping Camp Crystal Lake closed after it led to her son’s death. The film is consider a classic by some, so why aren’t there more female antagonists in horror?

There certainly isn’t a shortage of females in horror. In fact what would horror be without women, especially the much revered scream queens? It’s not that there aren’t any horror villains of the fairer sex either; the problem is that they don’t fall into the typical villain mould.

Often a female will be a “villain by association”, where the female villain is a cohort of, or a servant of, a more dominant male character. An example of this in more recent years is Amanda Young from the ‘Saw’ franchise. Amanda is, without doubt, a strong and vicious character, arguably more than Jigsaw himself. However, she is a pawn used by Jigsaw in his game and it’s definitely Jigsaw who is top dog.

It isn’t a new phenomenon we are dealing with either, look at the many “Bride(s) of…” film we have seen, where everyone from Frankenstein to Chucky wheeled out their spouses. These women are terrifying and dangerous because of the man on their arm, a similar notion to that used by Forbes magazine to announce Michelle Obama as the World’s Most Powerful Woman. That concept was described by journalist Grace Dent as ‘a backwards notion that being on the arm of a powerful man raises a woman’s stock more than her own personal achievement ever could’ and to judge a villains female companion in the same way is just as backward.

We often see females in the “tragic villain” mould too. In this role we see a villain who is equally, or more, the victim. For example, take Carrie White (from ‘Carrie’). Sure, Carrie does some terrible things but her actions come as a result of the torment and bullying she suffers until the persecutors become her victims. Ginger Fitzgerald also takes on the tragic villain roles in the excellent ‘Ginger Snaps’. Katherine Isabelle’s teen-turned-werewolf suffers for her metamorphosis, almost as much as her hapless victims. Such empathy is rarely shed on a male character and hasn’t been since Boris Karloff’s poignant turn as Frankenstein’s monster. So, why is it we give women such a get out clause?

Then we have the “manipulators”. The women who themselves do not kill, but influence those around them to complete their work. A final twist in Cry_Wolf reveals this to be the case but it is done far better in the well crafted All the Boys Love Mandy Lane. Amber Heard’s all American girl next door manages to execute the perfect plan and rarely has to get her hands dirty, or bloody, along the way. No doubt these women can be evil, however, then are of little threat without a minion or two (usually men) to carry out their work.

Last but not least there is the “not really a female at all”. Take for example The Woman in White from low budget flick ‘Dead End’. At the end of the film it is revealed that the woman is in fact a malevolent spirit reaping the souls of those who died in a car crash.

In a reversal of this role we see what perhaps the most blatant misogamy of all is. French horror ‘Switchblade Romance’ reveals, in fact, it is our heroine Marie committing the murders out of a lesbian lust for Alexia. However, every kill is completed by Marie’s alter ego ‘Le tueur’, an overweight, sadistic, Frenchman with a penchant for sex acts with decapitated skulls. Is it perhaps indicative that the only we can accept a female is through a twist that allows us to believe she is a man for the majority of the film. 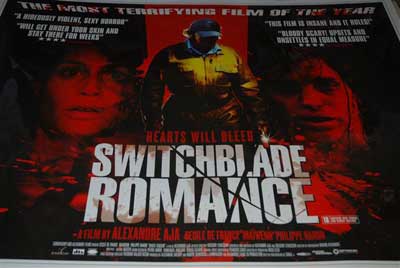 It is another French film that breaks this tradition though. 2007 film ‘Inside’ is unabashed in its portrayal of a female villain which it plays no holds barred, holding back nothing by the way of the depiction of a mad woman though it does still offer us a glimmer of empathy at the end not dissimilar to that of Pamela Vorhees. 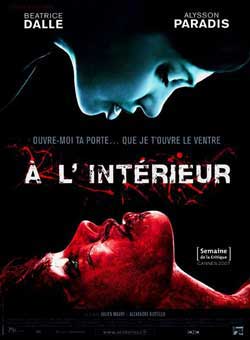 However, none of these women have the evil characteristics that there male counter parts possess. Jason’s black heart, Freddie’s paedophilic child killing or Michael’s “blackest eyes… the devil’s eyes” and, until they do, this trend of a male dominated genre will continue to exist and women will be the oppressed gender in the horror.