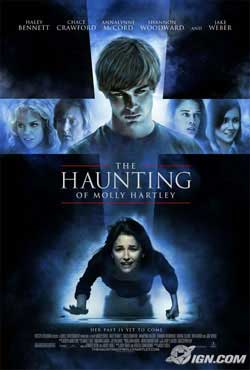 Troubled by her mother’s recent psychotic break, Molly (Haley Bennett) hopes to start fresh at a new school. She befriends fellow senior Joseph (Chace Crawford) and is happy to be a regular kid again. But the horrifying truth about her mother is destined to catch up with her. When Molly turns 18, she’ll be held accountable for a supernatural bargain made long ago, one that she cannot escape. Jake Weber co-stars in this sinister yarn.

In anticipation of a new haunt film, I was eager to check out the latest by the name of “The Haunting of Molly Hartley. It seems there has a been a rush of films with the name “haunting” in it. I for one always enjoy a good ghost story provided that it “is” a ghost story. So what do you get when you have a ghost story with no ghosts? Ya exactly!

The term haunting in this case “kind of” refers to Molly being haunted by demons of her past. Not literal ghosts. So right off the bat I was slowly becoming disappointed with most of the film running by without a single haunt. Our tale begins with a young teen who is kidnapped by her father so can kill her before she turns 18. Something about not letting her become 18 is of importance and so the father takes her life into his own hands. This is the segue into our main story.

A young teen by the name of Molly (Haley Bennett) is on the cusp of turning 18 and has become a new student upon her and her fathers relocation to a small town. Molly is a pretty girl and is welcomed into he school with the usual teen angst and on screen formulas you’ve seen a ba-zillion times. For those who don’t know what those are it’s…. meet new love interest, piss off the bitchy pretty girl (girlfriend to the love interest), meet weirdo religious nut, meet mad-at-the-world teen who likes to party and then form relationship with some school figure..usally a guidance counselor..as it is in this case. Got it?

Now of course, we get to the 2nd act where new student deals with all this crap, and hates life in general. Past drama includes a mother who tried to kill her but is locked in a mental facility. Even that sounds pretty derivative. Dad is raising his daughter now and struggling. Dad is also hiding something from troubled daughter. Molly meanwhile is having panic attacks, visions, migraines and girl problems. She also thinks she keeps seeing her mother who is supposed to be locked up. A few reveals of her stab wound reminds us that of course she “was” stabbed in the past. There’s alot of story turns that are pretty obvious and an ending you can see coming a mile away. Molly herself actually pretty closely resembles 2 other actors in the film , hairstyle and all that confuses things at times. Well at least me.

Ok, the rest you can fill in the blanks. The major focus of this film is the dreaded turning of 18 and what happens when she does. Hints, clues and nose bleeds occur along the way suggesting something more sinister at hand. Oh ya..about that haunting …..there is none. So why call the film “The Haunting…”? Another ploy to market a film that is completely something else. Is it horror? Maybe slightly but its the kind of horror served up light and safe. So at this point i wasn’t sure what the film wanted to be. At times it was a Christian film, at other times a teen drama, and at other times a sect based film. Or maybe it would better be marketed as a supernatural thriller? Whatever the case, the film was just “ok”. I’m not going to give this one great points because in all it really didn’t add up to much. I myself was wondering what had happened to this film as it was being marketed and then fell the wayside on announcements. It’s ok, your not missing much.

If frights are what your expecting, there are none. Which is a shame as I had high hopes for this one. With a PG-13 rating its safe to say that it holds true to that. The acting performances are ok, the film is ok, but mainly it was a big letdown. If you can find something better to watch then I’d shoot for that.

Tags The Haunting of Molly Hartley