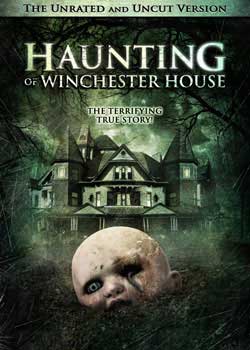 When a young family moves into the famously haunted Winchester House, a wildly sprawling mansion built by an eccentric heiress, they begin to wonder if the tales of spooks and ghosts roaming the halls may actually be true. But all their doubts are erased when an evil spirit takes their own daughter captive. This horror-thriller from director Mark Atkins stars Lira Kellerman, Tomas Boykin, Patty Roberts and Michael Holmes.

As Asylum continues to follow the horror trends with new releases, we see quite few titles that arrive from their neck of the woods. It’s not a mystery where this film was influenced from, though that still doesn’t mean that the product is less because of that. In their latest film “The Haunting of Winchester House” the main theme here is a ghost story. Now an added surprise is the addiction of 3D to this release, complete with glasses…etc .

I started the film in 3D then decided to go back and watch the rest in 2D. My reasons are that I prefer to see the colors better than just an effect. The effect worked nicely though but your forced to watch in a green / red sort for filtering. But in short, its a cheaper route for 3D than spending the $9 a person at the theatres these days.

The Haunting of Winchester House was directed and written by Mark Atkins. It stars basically 3 actors who make up the family cast. Though upon checking credits on IMDB, it didn’t list the character names so I must confess I didn’t catch them in the film. Anyways actors Tomas Boykin, Lira Kellerman and Tomas Boykin make up the family hired as caretakers for the huge Winchester estate. Now the Winchester House is a real establishment that resides in Santa Clara California. In fact it’s a museum, tourist attraction that sits nicely next to the Century Theatres.

It is also a favorited ghost tales tour that is visited daily. The film features a rather large house located in the woods. From appearance I’m not sure if this is a CGI overlay of the original or just a set but I assumed a set from the outdoors scenes. The legend goes that Sarah Winchester, a wealthy heiress was obsessed with the continuing construction of her house. The ghosts of spirits who were shot from her acclaimed Winchester rifle were said to haunt the residence. The constant building kept them confused and therefore reduced the level of haunting’s. This is all in theory of course. Yes, all is true or thought to be true. I personally think that the Winchester legend is wide open for numerous interpretations for filmmakers wanting to base theirstories on something of legend. 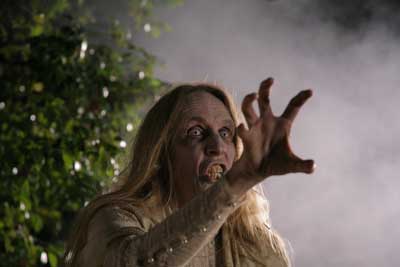 The film takes the concept with a family who are making ends meet by care taking the place. What they didn’t anticipate was all the supernatural activity. Yep, lots of ghosts….a few mystery’s and alot of creepy activity. When they arrive they are greeted by Harrison Dent – paranormal investigator, who claims he is a famous ghost tales author and spiritualist. He is the family aid when things get tough with the ghosts and undead. His role is not unlike the medium from the Poltergeist films, but we later discover he has a higher purpose as well.

Much of this plays pretty cut and dry with creeps coming out of the woodworks and a family in panic. The purpose is to unveil a mystery of the Winchester daughter who’s body was never found. While this all unfolds, the film employs alot of ghostly tactics to raise the bar on haunts. Theres a healthy helping of hallucinations, freeky appearances and mind seizures added in. 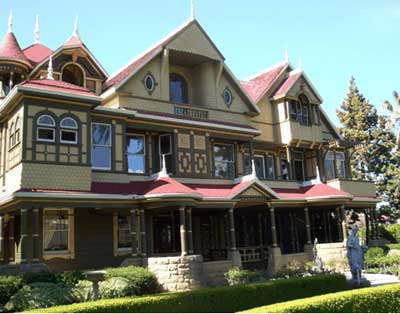 My opinion on this one was, that I didn’t find it scary but it was creepy. The ghosts were pretty minimal on using any effects. Though they seemed to do just fine walking around in the dark and lunging out from time to time. Again, no much jump factor but an ok ghost film. The film comes complete with a trick ending. Which I wont spoil but once you see will start naming 5 other films…

Nothing wrong there but just not original. The cast does fine with the materials, and the underlying score is fantastic. The color tones were reduced to earthy desaturated tones to add to the cold factor which works fine for the cinematic presentation. I’d say this is a decent offering from he Asylum folks and fine fore family creepy viewing’s. Perfect for Halloween rentals who want there impact and violence on a lighter scale than the norm these days…..check it out!