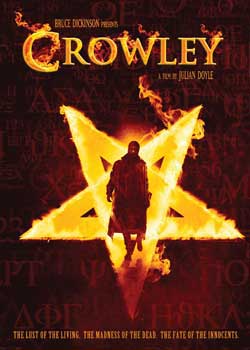 An incredible movie about none other than the infamous Aleister Crowley. A film that delves into deep places that really requires 2 viewing’s to get the sum of its whole. “Do What thou will shall be the whole of the Law”. These words will chill you and also bring you 1 step closer to the man of mystery himself. As the cover boldly protests “Bruce Dickerson presents” from the mind of Iron Maiden singer himself comes a story he wrote as a script in between his rather remarkable creative music career that was finally made into a film starring Simon Callow. Bruce is also seen in a few cameo roles and of course several of the film’s soundtrack offerings. In fact, in the end credits if you forget, you’ll soon be reminded with the breaking out of his highly identifiable singing voice.

Now the story! If ever there was a unique film made about the tale of this enigmatic man, this is surely one of them. Crowley fans will thrive in its obvious bizarre tribute to this man who called himself the “Beast”. Though rooted in Crowley lore and history this is a film unto to itself that really explores his sense of being. Unlike many films I’ve seen that merely are documentaries explaining his rise and fall and curious life as an evil religious sect leader. There is alot of fiction interlaced with science fiction or so it seems. So you have to sort of pull things together and not take it all literally. Would I call this a horror film? Not so much as a unsettling portrayal of a horrific man and his occultism. Though for the record it sticks more to the thriller side of film genres than slice dice and slash.

With its obvious complexities in narrative, I thought better to summarize some of the details to make the ride easier. Our film begins back when Aleister was on his last breath, 1947. At first notice the actor portrayal performed by John Shrapnel who plays Aleister is dead on. In fact you’d be hard pressed thinking that its not Aleister himself with the visual likeness. Our 2 visiting friends are Alex and Symonds. They visit Aleister on his last day of living. Alex grabs Aleister’s watch and in turn his curse which we see him later wheel chair bound. Symonds goes on to become a professor at Cambridge.

Now we fast forward to the present. Symonds is a much older professor in a time of technical advancements. Dr Oliver Haddo played by the enormously talented Simon Callow is a professor as well. He is recognized by his obvious stutter, messy hair and slow presentation. DR. Josh Mathers or professor Mathers is new in town to see the z93 project through. Victor is the technician who aids Mathers. Lia Robinson is a student at Cambridge and has an obvious interest in Mathers that starts simply enough with an interview.

This begins our journey of mixing fiction with science fiction. The z93 is a Quantum level physics program that almost deals with alchemy on a sub particle level. It’s purpose is to fuse the computer fed into with the subject and vice versa. Victor who has an enormous Crowley interest feeds 1000s of facts, figures and what not about Crowley into the computer. His test subject …. Dr. Haddo! Dr. Haddo volunteers for the experiment donning a metal suit while the computer does the rest. The experiment works, but maybe too good as Haddo becomes possessed by the spirit of Crowley, his knowledge and secrets beyond the astral plane. An instant personality transformations takes place and Haddo “is” Crowley”. Clues of this becomes more and more apparent to all who know Haddo. The rest is a plot drive to fix, stop or reverse the newly unleashed Crowley on the world. Crowley a 1920’s occultist, resumes where he left off, including steps to make the transformation complete per way of a “Chemical Wedding” (also the original title of this film) and old rituals. The results brings alot to supernatural fun to the film and especially Callow’s performance.

The film is directed by Julian Doyle, editor of Terry Gilliam’s “Brazil.” and is quite an undertaking in itself. Though you might be better off in the first viewing to leave the subtitles on to get all the information as it passes back and forth on screen. The journey also takes on the issues of time travel, multi universes and the astral plane. So if you end the film scratching your head, remember that time is a element of quantum physics in which can be displaced.

Now in all fairness, I’ve done my share of Crowley reading in myth days. So I know that this film presents alot that may go straight over the viewers head into a rather mess of confusion at times. Though don’t let that take away the fact that it’s still a remarkable film. As mentioned before, it may require 2 viewing’s, as much that is discussed is rooted in esoteric religion and not really a common knowledge to most casual viewers. For this I say that the audience may be a mix of roots and nays on the films ability to carry over into film viewing circles that communicate in ways that everyone can consume.

Final word? – A wonderful film that I’ll re-watch many times! Deeply sustaining, and historically engaging! Brilliantly intelligent horror that comes from a darker place close to home and place in science that is just around the corner.

Crowley is Set to Slay Again in ‘HATCHET 3’