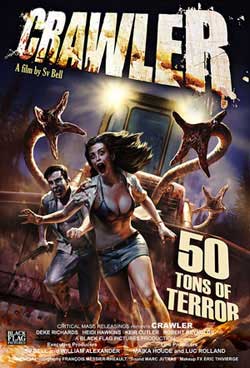 A construction crew is trying to solve a mystery about their bulldozer, which appears to have a mind of its own – and an insatiable hate for the human race. They are soon to discover that the heavy machinery is in fact a shape-shifting life form that mimics and inherits the characteristics of its surroundings.

One look at the cover art and you’ve pretty much got the gist of what Crawler entails. A killer bulldozer…you say! Well not quite but close. Stephen King would be proud with his knack for stories about killer machinery. “Crawler” refers to the term they use to describe the bulldozer machine they use to plow land, etc. In this case, the killer bulldozer is just the tip of the iceberg. How about alien killer bulldozer….keep going….with tentacles…yep….with acidy touch…yep…how bout slightly paranormal…yep some of that too.

You got to hand it to writer Robbie Ribspreader & writer / director Sv Bell for their imagination. Cause this one makes a first for me. Here’s the clincher. The film looks great! For an independent, everything feels just right. The shots, the acting, the look and feel and a special kudus to the FX work. My first thought was this could easily be sold to SyFy as a weekend movie highlight. That of course is meant in a good sense.

Ok, no where were we…. Jimmy (Deke Richards) has just returned from a leave of absence. His partner….the lovely Sandra (Heidi Hawkins) has been busting balls in his absence to keep the crew on track. She is a shiny penny in a field of dirt…kind of an incentive for weary workers who need a visual pick me up…so to speak. As the team is prepping a new site they get worried when there scheduled “crawler” has not shown up. Meanwhile the crawler that they ordered has been rented out, and as a replacement the driver insisted on taking an old relic sitting in the back lot. Well, this old relic has a bit of history…but you’ll get to that later in the film.

Now when the machine finally arrives it causes weird things to happen to members of the crew. Like for instance a burn that infects into a bulbous viral fat oozing zombie effect? How’s that for a stretch? In fact alot of killing goes on that you wouldn’t expect from a bulldozer horror film. Chopped heads, viral outbreaks, chewed up acidy looking bodies….yeehaw!

Carl, (Keir Cutler) the resident…A-hole and fuddy dud takes a liking to old dozer and develops a kind of sentinel-like relationship over the old rusty machine. Pods begin to appear in odd places and the FX team gets to really show off there stuff with squid like pod tentacles that pop out now and then. If that ain’t enough it even seems to sometimes pull a few supernatural tricks like making phones go out and cars not start.

It all sounds misplaced but it tends to work just fine with a competent team behind the film. The bottom line here whether you dig it or not is the Black Flag Pictures team behind this odd addition to the machine meets alien configuration does a great job making it all work. Eric Thivierge, the man credited for special FX is one to watch out for as he nailed the gags perfectly. Music on this production was handled by SV Bell and Mars. Some of Mars work in the past I’ve thought might not be the right direction but he proved that he can tackle the pros just fine on “Crawler”. Last, but not least…great work on the poster art! A fine piece in itself by Donald Caron who is also responsible for the Fantasia Intl’ Film Festival posters.

The film has won several film festival awards for good reason.Crawler is one odd beast that proved to be alot of fun and an interesting change of pace. Never have alien bulldozers looked better!