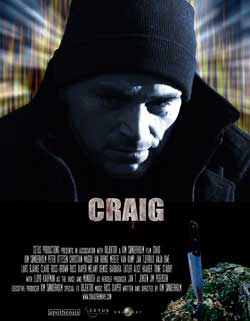 Craig is left all by his own when his parents die in a fire, and when he loses his medication, his world is turned into terror and fear.

Craig is a micro budget release from BrinkDVD and Cetus productions. Directed by Kim Sonderholm, Kim also plays the lead role of Craig. LLoyd Kaufman makes a brief appearance as the voice in Craig’s head in a special cameo.

To begin, is to describe our main character of whom the film entails. Craig Anderson is our resident loner with a timid nature and on the most part married to his prescription of lithium. The pills are to curb his panic attacks which without creates a different persona than he desires. His life has taken a turn for the worst as his parents and younger sister were just killed in a tragic house fire. Beyond that, life for Craig is pretty mundane. His existence consists of daily rituals, online chats, stripper bars, surfing escort services and spending time with his best friend Cliff. Our opening scene is of Craig being questioned by the local authorities who are investigating the cause of the house fire.

Even in his solitude state and numbing existence, you can feel Craig is on the brink of self destruction and devious intentions. Cliff on the other hand who’s home life relation seems to be on the downward has no problem keeping himself entertained with nightly hookups. This notion seems to also play on Craig’s nerve and ability to interact.

Craig creates a world that ‘s gray at best in its solemn existence. While motivation isn’t lacking, his ability to connect to the world in a normal manner is. Escort services provide quick thrills but at the cost of unfulfillment and emptiness. A question is asked in the form of statement. Who are we without purpose, drive and passion?

When Craig’s dead father starts showing up in hallucinations, we begin to get a bit more facts about Craig and his upbringings. In fact in this single moment the pieces come squaring together in a puzzle fit kind of way. Whatever the case may be, the pills curb his devious desires but also leave him dead to the world he’s trying to interact with. When Craig loses his his pills, the gates are swung full open.

Voices that were softened by his prescription start up again and Craig is out for blood. Targets being a long line of women who scorned him in the past. While some are killed on the spot others are left for a later time. Though he seems to have no problems feeding this desire in a disturbing kind of way.

In a turn of fate, he meets Angela a beautiful companion who instantly clicks in a chance encounter. Though life remains as cruel as ever in Craig’s world where nothing good ever really transpires. Soon his inspiration becomes just another reason to loathe everything around him. Meanwhile the detectives on the case follow leads, clues and hunches to find there serial killer and put him down for good.

Craig is unique in that its main actor and director are one in the same. Because of that, the portrayal of Craig is exactly as envisioned having control over both elements. Perhaps the film provided a certain amount of release in seeing the mundane turned wicked. A notion that all men scorned fantasize acting on if only for a brief second. Though the film is not so much anti women as it it is a breaking down of barriers and acting upon these emotions. The obvious nature to fill the film with more blood and violence than necessary is left behind in this case. Rather than go the obvious route the filmmakers have chosen to focus more on the psychological makeup of the character and his motivations. The result is a great piece of work.

The film is not groundbreaking, but it is personal and effective. It also mirrors studies of classic true serial killer cases who dealt with a tragic childhood circumstance. Sonderholm is intense is a very mundane way. While his next door image isn’t threatening his conviction is. For a micro project, Craig holds up nicely and creates a great sense of felt drama with a curious character.