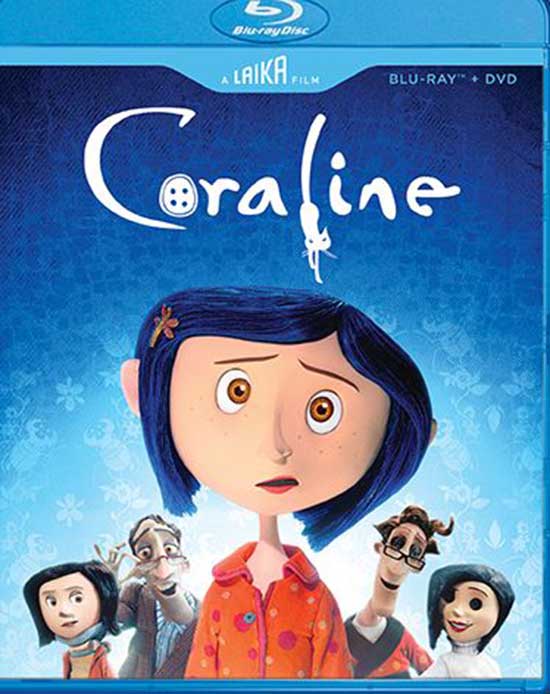 In this breathtaking stop-motion animation based on Neil Gaiman’s novel, curious young Coraline (voiced by Dakota Fanning) unlocks a door in her family’s home and is transported to a universe that strangely resembles her own — only better. But when her Other Mother (Teri Hatcher) doesn’t want Coraline to return to reality, our heroine must summon an amazing amount of courage to go home and save her family.

Coraline is a 2009 animated stop-motion film starring Dakota Fanning, Terri Hatcher, and John Hodgman. It’s directed by Henry Selick and is based off the novel of the same name by Neil Gaiman. It’s about a girl named Coraline (Dakota Fanning) who moves into an apartment with her parents, Mel (Terri Hatcher) and Charlie Jones (John Hodgman). Her parents are working on a book and aren’t paying any attention to her. Later, Coraline finds a passageway in one of the rooms and she finds a better version of her life. Better parents, better food, better everything! It seems great at first, but in order to keep these things, she has to do something horrible. 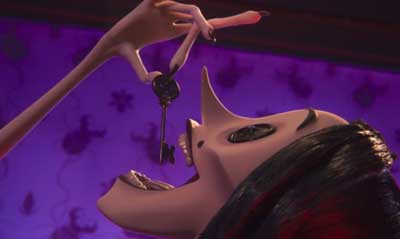 The movie opens up with a doll that looks like Coraline being made. Then it shows Coraline moving into Pink Palace Apartments with her parents on a rainy day. While being ignored by her parents, she meets a boy named Wybie (Robert Bailey Jr.) who annoys her and a crazy neighbor named Mr. Bobinsky (Ian McShane) who has a rat circus. She also meets some other crazy neighbors.

Wybie later gives Coraline a doll that his grandmother made that looks like her and says that he’s not allowed at the apartment because her twin sister went missing there.Later on, Coraline wakes up in the middle of the night and follows a mouse into a passageway that leads to another world. (Her mother had blocked it earlier in the movie). That’s where she finds a better version of her life. 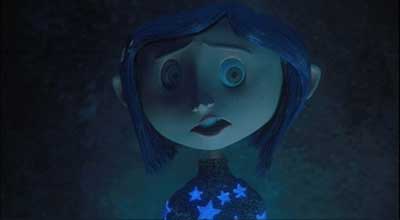 This movie is excellent. Both children and adults can enjoy this. Even though we feel this is more of a movie for certain kids, probably ten and up. With that said, we had fun watching this movie. The story kept us on the edge of our seat the entire time. Also, the animation was beautiful, you don’t always need colors to show something that looks good. 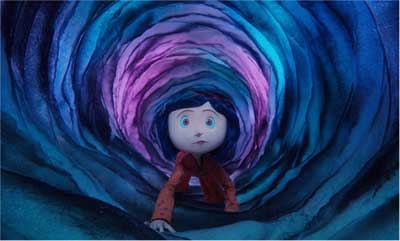 The voice acting was great, too. We really believed Terri Hatcher as someone who’s truly scary and Dakota Fanning was adorable as the spunky title character. Dakota has grown up a lot in these past few years and Coraline was a great movie for her to do not just as an actress, but as a voice actress.

Have you ever looked at a movie frame by frame? Do you notice how bizarre the performers appear when the camera freezes them in mid motion? People make the strangest faces and body movements that go unnoticed when time is allowed to flow naturally. Likewise, skilled animators know how to mimic these properties with the flow of their characters in each frame. Stop motion on the other hand has an unnatural quality to it, the characters move awkwardly and bend in unrealistic contortions because the figures have to be positioned still for each frame of the picture. This jagged flow gives stop motion an innately creepy feel to it. Suffice to say, the format works wonderfully well for Coraline. 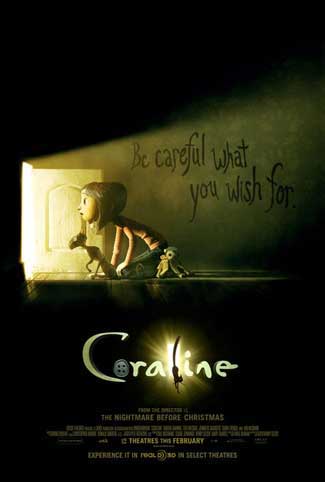 Works by Neil Gaiman have been a mixed bag when translated to movie format, but Coraline manages to be scary in an unnerving manner in all the right places and charming when it needs to be. The scenes in which Coraline’s surrogate parents give her the warmth of home through sewed on button eyes works brilliantly on both levels. We know she’s in danger but we understand why she doesn’t pick up on it. Maybe Neil Gaiman books should always be animated features. 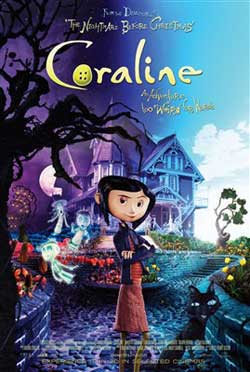 With a running time of 100 minutes Coraline manages to cram a vast amount of story into its acts, and yet somehow none of the supporting players feel tacked on or expendable. Like Alice in Wonderland, Coraline is a series of encounters, but ones that connect like a collage. Surrealism is often misunderstood, but when it’s done correctly it speaks to the maturity in children that they don’t realize they have and to the whimsy in adults that they’ve forgotten about. Coraline understands surrealism and embraces it. We could use more films like this. 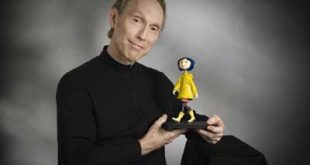