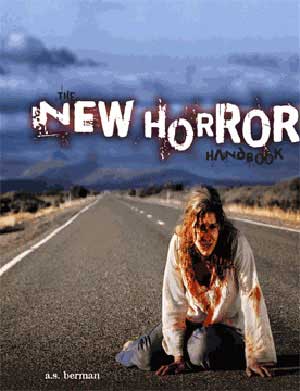 When you are head deep in the horror genre business and have the opportunity to review and read several books, you tend to see alot of repetition. Not that I mind it, but there’s only so many film collection books that explain why “Texas Chainsaw” or “Halloween” were great iconic films that they begin to wear thin. Still being the gourmet I am of all thing horror, I still rarely tire of them.

The New Horror Handbook offers something of this genre that actually peaked my interested right of the bat. That being a genre book that gives kudos to the newer stuff. The stuff that is great “right now” and didn’t coincide with the release of “Kiss alive 1 and 2” albums. So you can imagine my excitement when this book arrived that offered some specifically interesting point on the back. “Secrets of Saw films”, Eli Roth – from rags to riches (or something like that), cult hit Cube and it’s history (special high five on that one) and a hearty look at the film “Inside”. Cool beans!……. All very much subjects of interest to me and quite a few other people I know of.

A.S Berman is your host at hand. Though this book is no “everything is great in the world” kind of read. In fact some of his statements will surprise horror readers while others will prompt uniting in a candlelight vigilant.

Once I began exploring what it had to offer, I must confess I had a hard time putting it down. Where it excels is in it’s focused coverage of interesting people and subject areas. So rather than a “here’s all the films that’s come out in the 2000’s lineage” it focus’s on the films and individuals that have provided impact.

We begin with a nice over view of Eli Roth and his historical rise to quick horror fandom in a relatively short time. I remember it well as even as good as a film as “Cabin Fever” was it was more surprising how the media and industry took to him. The Hostel follow ups though put the staple in the heart of placing him firmly as a next generation filmmaker icon. The book takes us from his upbringings to his film school days and finally to where we are now.

Cube and the story of Vincenzo Natali is heavily engaging about a film that was assumed to be a smash but in fact slowly climbed into cult status over a much longer period. What is even more fascinating is the set of Cube which provides pictures of the 1 enclosure built within a small warehouse and turned into the megacomplex on film that is imagined as hundreds of rooms . Cube is discussed as well as the follow up sequels that Natali had nothing to do with.

If your a SAW fan, then look no further. The book has an impressive section talking with Bousman about the SAW franchise. We also learn more about the struggling artist who just happened to take a chance with SAW as an almost a call it quits situation. Struggling with the circuit for quite some time, it was the offer to buy his script that Bousman refused unless he be given the chance to direct the film. It’s stories like these that ring truer to life than the hype that follows containing cover profiles and bigger than life interviews. We get some real down and dirty insight into the films, it’s actors and the progression of the franchise.

One of my more favorite chapters, seeing that I am also involved in a similar business is the rise of Rue Morgue and there story to tell. Often we get to the point where we assume certain things that in fact are not the reality of every situation. It’s also good to see and read that old….we came along way from financing our first 3 issues on credit cards tale. An insightful story about how time changes realities for artistic minds.

This and several more sections provide all the makings of a nice selection of talent to feature. The book also has plenty of black and white photos of which many I’ve never seen before featuring moments and behind the scenes shots.
One thing I noticed was how “fresh this book is. Even speaking of films and magazine covers that came out less than 2 months ago. That sense of now is quite different and a nice change for books that focus mostly on past achievements. You almost feel like you’ve just read a long magazine that will have a new issue on the stands soon .In all, this is one of my more favorite books to read on the genre as of late. There is solid materrial here as mentioned before.

The material is insightful and loaded with background information that is a ode to the author who has done his homework. I’m gonna have to give this one a solid “must read” salute and encourage you to do the same.