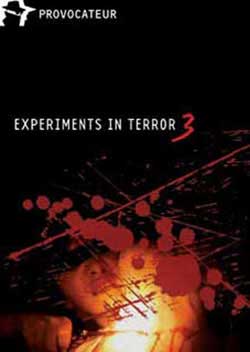 Striking for the third time, EXPERIMENTS IN TERROR 3 unleashes another hallucinogenic orgy of the uncanny, the dreadful, and the macabre. Employing a mesmerizing montage of terrifying tropes and fiendish footage, our kino-coven conjures more than a bewitching hour of visionary cinema. Pounding a stake through the heart of genre convention, this shocking program expands the cinematic language of fear, breaking the chains of narrative logic and leaving only the black void of the infinite unconscious. Featuring: – Marie Losier & Guy Maddin – Manuelle Labor – Mike Kuchar – Born of The Wind – J.X. Williams – Satan Claus – Carey Burtt – The Psychotic Odyssey of Richard Chase – Ben Rivers – Terror! – Jason Bognacki – The Red Door (excerpt) Extras Include: – Clifton Childree’s chilling one-reeler It Gets Worse – Upcoming releases from Provocateur

Experiments in Terror 3 is a anthology short film collection produced by Provocateur DVD and curated by Noel Lawrence. Projects like this have to be appreciated for what they are and what they achieve. Uniquely it mixes a collection of older and new shorts. This blend of horror gulash gives the viewer not only a horror experience but era specific ones as well. Proof of this can be found in the shorts
“Satan Claus” and “Born of The Wind”.

While the older shorts are simpler and eerie, the newer shorts are violent and visceral. It’s also nice to see a usage of not only style but types of presentations. “The psychotic odyssey of Richard Case” is entirely done with dolls, and puppet objects. The story itself is a true story based on a horrific portion of humanity, though even with the usage of props the tale still retains a jarring sense that is hard to imagine, let alone hear. “Satan Claus” to me was one of the more nightmarish. It’s simplicity and blatant disregard for the Christmas holiday makes it a retro based horror show. While its clear what the original purpose if it was from the liner notes, the 16 mm stock usage gives it a certain creepiness that stays with you.

“Manuelle Labor” although created in 2007, gave a believable impression of a much earlier film effort using 16 mm stock. The subject matter, the birth of a set of hands is not something you see everyday and makes you wonder how the concept came to mind when trying to think of a suitable storyline. Bizarre is one thing, but combined with horror elements they becomes works of art.

One of the more intriguing and surprising shorts was the 24 min piece called “Terror”. “Terror” is not only a visual journey but a statement on the lineage of horror. By using a combination of all sorts of classic modern day horror films, it proves that we as an audience respond to the same types of elements. The elements are repeated, have similarities, execute in the same manner and contain plot directions and narratives that could be called formula driven. Of course most of these that I recognized went on to be big achievements for the genre. It points out that we celebrate content that travel down similar paths. If not that then an ode to the creative horror directors that have the genre figured out and give us what we desire on a continual basis. Fear, buildup, framing, location and camera POVs are all portions that are served up under different shells but still familiar enough to produce the same results in viewers. Remarkable

Rich in paranoia, fear and an assault on the senses, these shorts run this course on several of these little gems. “Born of the Wind”, while some of the content dragged, employs the usage of stop motion horrific’s in its final act. Thoughts of Frank Zappa and “The Evil dead” come stop mind though the difference being that this film was created in 1961. Not a bad attempt for a 60’s project.

“The Red Door” is just plain disturbing. The brunt of this is in the dialog and speech the child abusing father gives to his daughter. You almost want to root for her transformation. It’s all pretty much centered in a dark place. While the short is disturbing, the greater notion is that this idea is not far from reality in many sectors of the world. A revenge film is almost required in the making when undergoing such tragic upbringings. A clever usage of symbolism and visceral confrontations.

The whole collection ranges form surreal, to dated, to just plain bizarre. A quality that keeps one engaged to see what pops up next. There was an obvious passion for the materiel collecting that went into this release and that in itself is a great reason to own this product. I would recommend this while also suggesting investigation into the previous efforts 1 and 2 to explore the ideas further.