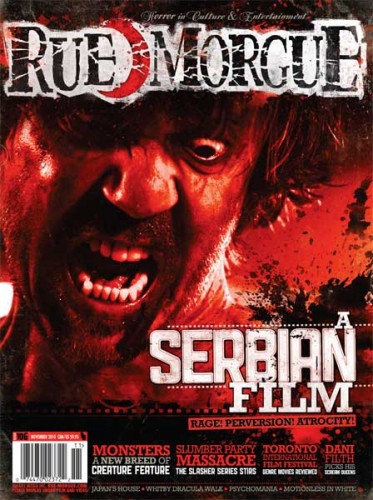 You may have seen it, you may not like it, you may have some stronger feelings about it…but there is no denying its present impact as a first release has the horror fan communities quickly exchanging copies with a simple “you’ve got to see this”. Just as soon as “Human Centipede was gaining momentum on the horrific circle, comes along a strange entry that tops it with the single title of “A Serbian film”.

Yes, this issue features this impactful film prominently on its cover and even gets to chat it up with the director a bit. Not only that but to our benefit Rue as provided a current “Serbian horror films” list for us to investigate on our own in time. As they point out though, the Serbian film industry better get caught up with their subtitles and ride this wave while they still can as most America horror fans will be wanting to dig into more from this country just to see how their other films will match up.

Rage, perversion and atrocity….. scream out front cover in this new era of over the top filmmaking we have entered. If this is a sign of the times, it’s pretty apparent that we are quickly becoming a society of more, more in an economy that promises, less, less, less.

On that note, in another sense the magazine also announces the arrival of a few new Asian hardcore titles that approach this angle with a much more theatrical approach. “Robo Geisha”, and “vampire girl vs. Frankenstein girl”. 2 new entries with much more in their wake to follow. Quickly back to the Serbian interview with director Srdjan, we learn of a film that really became a horror genre entry by association. Hard to believe that this crazy production was meant more as a drama that ventures into hell.

The “Monsters” production by filmmaker Gareth Edwards gets a nice 5 page feature. I do confess though I’ve yet to see the film and hope to real soon… I’m not sure if most of you all noticed, there is quite alot of new films and new horror films arriving like a tidal wave lately. The rues of the game have changed, but the need for product doesn’t seem to ave lessened any.

Slumber Party Massacre is one such released series of films that I probably won’t be getting to any time soon, though they still have made enough of an impact in this issue to warrant an article. Moving on, “Horror comes to hog town” is a quick overview of some of the new titles I’m speaking of. This years Toronto Film Festival featured a healthy batch of need-to-sees… 15 to exact. I’m anticipating all of these, as the whole world has seemed to step up the game on horror releases. Some great titles here to read about.

“Horror Garden” is a Dani Filth tribute to the women of horror. Well at least the ones that he feel worth mentioning. Though these lovely ladies ave really given us some great materials over the years to ingest with anticipated vigor.

Reviews are provided on a few of the recent titles, though I do get the sense that the Rue morgue team doesn’t really like many films that come out these days. This is even more evident in the Fangoria Frightfest overview…which more of less calls them all pieces of crap. I don’t’ share that same notion myself, but then again they are not a major print competitor to my gig either. In any case, the Fangoria films were entertaining…with of course some points stronger than others.

Some cool stuff this issue which I’ll end of the surprise overview of the strange Asian horror film Hausa “House”. This one is about 2 films from my own list of films to watch, so its looks like I have even more reasons to look forward to it.