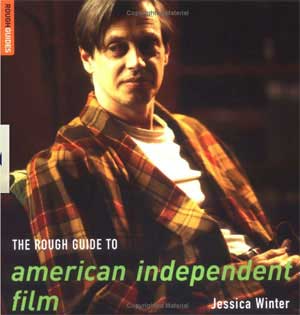 Independent films is a tough one, as most cult films fall into that category. This book could easily be re-titled “cult films” though the base and focus is geared towards the independent term. The truth is, there are alot of great cult films, profiles, undergrounds, nasties and related through out this book. So if you a cult film watcher like me, you’ve just gained an edge! Jessica Winter, author if the book has a great writing style. It moves throughout with fact filled data, intelligent reviews and descriptions of films. Many of my favorite cult films were found in here as I’m sure yours will too.

With all the other cult film books on the market, where does this one take you? Jessica starts with a introduction overview on american independents which brings everything intro perspective. The early days up to now. Titles ,film makers, directors, factual and even financials are mentioned. These are set up nicely with some cutaways of interests such as “blaxploitiation and “french new wave”. After which, we just head into the lengthy “Canon: 50 essential indie films”. This section is a great testament to Jessica’s insight and background checking on films giving us tons of info on the movies mentioned and there place in independent cinema. You’ll find many popular cult titles that run from past to present. Some include “Blood Simple”, Mean streets”, “Kids”, “Pulp Fiction”, “Eraserhead” and “Crumb”….which all easily fall under cult connoisseurs collections. She also overviews many that may be not as familiar. Well at least they weren’t to me. Some of these list as “Shadows”, “Go Fish” and “One false move”. Each is a detailed essay while also keeping very informative. It’s a great way to get acquainted with new material and obscurely regarded classics.

The book moves on into contemporary directors and talent. A very cool section of the book as it focuses more on the individuals progress themselves. We have sections on directors: Coen Brothers, Larry Clark, Todd Haynes to name a few. Also great cult frequents such as Steve Buscemi, Parker Posey, Kevin smith and more! Each entry gives a nice collected history naming there greatest contributions and the lineage of films they’ve contributed to. Not everyone you can think of is listed here, but you do have a nice selection of talent bios and reported presence in the media along with the film explanations. In a way, it sort of lays out things like a wikipedia entry giving facts, figures and exploits…

There’s a nice chapter on the “Hollywood Connection” for those inquisitive into more behind the scenes on the industry. The book winds down with listings of magazines and audio visual mentions. It even has a chapter devoted to “American Underground” which delves into he independent p*rn and horror markets….what a way to lump them 2 together huh! For horror fans, you’ll find alot of what your looking for under this section. There’s a ton of history packed under this 277 pages.

On desgin, the book is filled with Black and white photos of film clips. It leaves room for margins, so your eyes don’t wander and the burgundy colored titles help to locate titles easier. Featured film sections contain huge bold titles that aid in finding your movie title very easily. Also since the category of independent is massive, Jessica has included smaller paragraph review cutaways that pertain to the chapters.

Many genres are represented nicely This would serve as a great companion to updating your netflix que or cult cinema library. As an overview, it nails it on the head touching alot of material. Rough guides release so far have been great books to own. They are petite, printed nicely and authored by great talents. Even with it published in 2006, I was surprised that isn’t wasn’t commented on further in it’s amazon page. At $14.99 ($10 on Amazon) you really can’t go wrong. You spend more than that wasting $ on crappy films per year and get no souvenir…. Check it out folks!…really