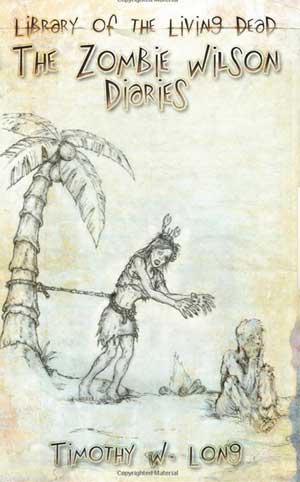 Surf, sun, sand, smokin’ boobs … It’s every man’s dream vacation. There’s just one minor hiccup. The boobs belong to a slobbering, stinking zombie. What’s a guy to do? Such is the dilemma for the hapless protagonist of Timothy W. Long’s latest novel, The Zombie Wilson Diaries. After a plane crash strands him on a tropical island with a hot but hungry zombie, he fends off madness by keeping a diary of his trials, triumphs, and myriad brushes with death. We have the privilege of stealing a voyeuristic peek over his shoulder as he scribbles the days away, and the result is a riotous roll in the sand.

I feel obligated to advise you that, should you too have a rotting undead lady friend hanging around, it would be best to avoid sharing Zombie Wilson with her. For the more putrefied among us, the degree of laughter the book inspires could prove to be sidesplitting in the most literal sense. And that would be one frightful mess. Can Zombie Wilson really deliver as much hilarity as the premise promises? Let me just say that it’s the only book in which you’ll find a sexy zombie with a bad case of crabs—the kind that walk sideways and pinch. Hard. And I won’t even tell you where the enema bag comes in …

Although the belly laughs abound, there is much more to this book than the jokes. The protagonist’s thought processes as he deals with his isolation provide an interesting comment on the nature of humans as social animals. Every time he steels himself to bash in the head of the decomposing zombie to whom he facetiously refers as “my girlfriend,” we question his reserve right along with him. Sure, she’s a drooling uncoordinated ghoul, but she’s the last link he has to humankind.

To free himself of the threat of her bite would be to leave himself entirely alone, with no one—alive or otherwise—with whom he can share his feelings. We understand his inner conflict, torn as we are between wanting the protagonist to escape her jaws and stay alive so he can keep writing and wanting the zombie girlfriend to remain animate so he can keep writing about her.

The relationship, such that it is, that develops between the stranded protagonist and the sultry snarler is often humorous, but also unexpectedly touching. He finds himself taking care of her, cleaning and grooming her—even if he has to gag her and sit on her back to accomplish the job. He dresses her, speaks to her, even gives her affectionate pats on her more intact bits of skin. In the midst of all the delightful absurdity, there is a strange sweetness in the interaction. (In other words, chicks will dig it too.)

The sprawling font reinforces the diary motif, and the stick figure illustrations provide an amusing lead-in to each chapter. Zombie Wilson will suck you into the island experience and have you turning pages with the voraciousness of a zombie who’s just found fresh meat. You’ll be aching to know how the protagonist’s tropical adventure ends, and you’ll never guess what fate has in store for him. It’s a great beach read, but if you can’t get to the shore, it will bring the shore to you—complete with palm trees, shark encounters, and the occasional flash of nudity.

Zombie Wilson is the most fun you’ll ever have with a corpse in a coconut bra … and that’s saying something. 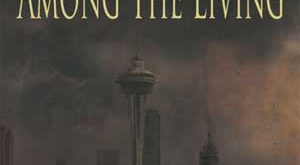