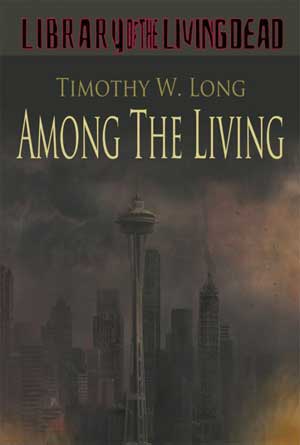 Among The Living, brought to you from the zombified staff at Library of the Living Dead Press, is the debut novel from Timothy W. Long. Mr. Long lives in Seattle and he uses his town as the setting for the zombie mayhem in Among the Living. Most of the main characters are locals and are familiar with the city. Mr. Long captures the feeling of Seattle better than grunge music did in the late nineties and after convincing me I was breathing that damp air he stirs up all kinds of gory zombie chaos.

In the past several months I’ve read more zombie novels than you can shake a disembodied arm at. I’m in no way declaring my self an expert but I have began to make my own list of common factors in the making of entertaining zombie fiction. Firstly, and most obviously, there has to be hordes of undead taking over the living and a cause for such a horrendous uprising. Among the Living opens with such and then puzzles the rest together as it goes. Over night a single incident leads to an entire neighborhood over-taken with the walking dead. Check.

Secondly, there must be guns. At least one zombie must be shot several times before being dropped. Once dropped bonus points may be added for rotting brains either flying in the air behind or leaking onto the ground below. In Among the Living almost everyone has a gun and many a zombie gets blasted; army kids with guns, serial killing hotties with guns, computer nerds with guns, house wives with guns, and drug dealers with guns. Check.

Number three is the characters. For the optimum grip factor, I feel that the characters must be quickly well-developed and then be risk chance of being devoured on every page. Several of these characters must be torn to shreds in heart-wrenching death scenes. Among the Living has an assortment of main characters (Mike, Kate, Lester, and Grinder) with a wide assortment of occupations (Writer for the newspaper, Serial Killer, Drug Dealer, and Lead Singer in a death metal band). As Among the Living unfolds you care for the characters as their world turns from normal (or as close as it gets to normal in Seattle) to a dark world populated with zombies, guns, and dead loved ones. Check.

So according to my own three point list (there are several more points but I try not to digress) Mr. Long has crafted an entertaining zombie tale for horror heads to dig. As far as bonus points go, I gotta say this is the funniest zombie book I’ve read yet. I chuckled on almost every page yet the humor never overpowers the power of the action. Lester (the drug dealing slacker) is a wise crackin’, rum swiggin’, pot smokin’, and AR15 shootin’ son of a gun that always has something funny to say. I am a horror writer that listens to death meal while obsessing about serial killers so in some way I felt connected to each main character and they each cracked me up at least a couple of times. Most zombie fiction is rife with smart dark humor but seldom do I laugh out loud when deep in the thrall of a good zombie tale.

Mr. Long switches up the narrative between first person and third person depending on the character a tactic that also scores points for catching me. I particularly enjoyed the chapters where Mr. Long puts the reader behind the eyes of a zombie. I was swept up and enjoyed every minute. Mr. Long is defiantly a writer to watch and Among the Living is definitely a zombie novel to check out. 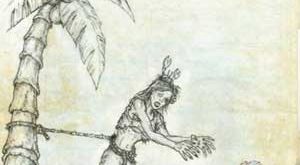