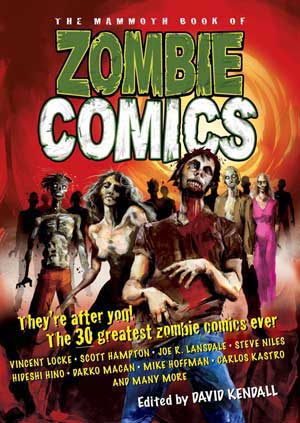 Wow… what can you say about zombie comics that hasn’t been said already? Well this edition in fact is a bit different of a format. Black and white through-out and bound into a fat novel type edition, this is one hellavua zombie comic collection. The graphical creative’s range in all types of pen and ink transformations which based on your preference runs from excellent to simple. Though there is plenty here that has extremely detailed pen work. I personally like this format rather than hanging on to a bunch of old magazines. The re-issue is clear and the paper pretty decent.

Each of these stories range in size and conceptual interpretations of zombie lore. Also their is a intro page to each that briefly informs of where the story came from and some synopsis type starter text. In short it’s a virtual who’s who of zombie artists and storytellers. As I went thru each of these stories, the plain and simple fact stuck in my mind. That is ….folks never tire of a good zombie plot. I believe its something within our nature of fear of folks who dies actually returning which as a result creates some pretty fantastical interpretations of this idea.

While many here are short stories, occasionally you’ll get the epic story which takes up a major portion of the book. “Dead Eyes Open” is one such story, with “Necrotic Dead Flesh on a Living Body” being another. I actually enjoyed the “Necrotic” epic as it had to deal with the hardship one faces when messing with the forces of nature and claiming immortality. In this case, our main subject has trouble maintaining relationships with a body that has to be regenerated every so often by mummification. I’m not sure the advantage is really worth the curse.

This story is really well done and carries a bit of emotional baggage that stays with you long after the read. Several other tales within include more simplified methods of zombism as an act of vengeance, as a social issue, as an inconvenience and even as a normality that rejects those not inflicted. Again these are all re-visions of that lurking fear that rests within. Now while this falls into a mostly adult content category, there is a bit of absese of the usual over the top gore that more recent comics have come to exploit. The black and white interpretations surely take alot from that factor but the intent here is obviously more on the creatures themselves that a blood bath massacre approach.

“Maze” takes on a more femme fatale role against the undead while “Black Sabbath” holds more psychological issue in its presentation.

Target practice anyone? A pastime that might fill the time for a little while…or maybe you prefer the traditional stories such as “The Corpse”. The contrast is pretty thick in this book so more chalk driven stories and artwork like “Pigeons from Hell” tend to get a bit washed out in the ink transfer. Though it is some pretty dynamic work produced. Really for a collection like this, stories such as “Zombies” is the proper mix of ink that works best for the edition.

Some grayscale for background but highly stark whites and blacks really jump out of the pages. For the price, you really cant beat the content. As mentioned before I really love the collection format that archives rather nicely than a stack of aging magazines. I’d love to see these produced on a ton more horror subjects. If you jump back to the front page you’ll see a huge collection that is already ready for purchase. Though not all fall into the horror genre territory. The book itself was edited by David Kendall and features perhaps way too many artists to name. Though it’s available from Running Press along with an entire line of these style book collections.