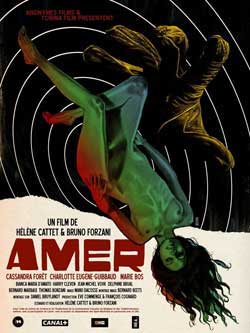 Three key moments, all of them sensual, define Ana’s life. Her carnal search sways between reality and colored fantasies becoming more and more oppressive. A black laced hand prevents her from screaming. The wind lifts her dress and caresses her thighs. A razor blade brushes her skin, where will this chaotic and carnivorous journey leave her?

If your like me, you probably began this film with the simple phrase, “what the SAM hell is going on?” The over annunciated audio tracks bellow out with every sound, creek and motion almost placing you in a state of either super hearing or audible alertness that is quite unlike most of the films you’ll run across in this lifetime. I was about minutes in, before I found myself running to the nearest terminal to get an idea of the synopsis of this film. Though that didn’t seem to really spell things out for me…was this another surreal annunciated journey that leaves much to the viewers to sort things out? Perhaps.

There is no denying the visually rich cinematography in this film. In fact there are so many well framed shots that you might even think you were reading a graphic novel instead. Amer is a French drama and horror giallo thriller devised and directed by the tag team of Hélène Cattet and Bruno Forzani. It picks up where legends such as Bava, Argento and Martino leave off. In other words it takes the idea of Giallo and embraces it with full conviction. This may or may not be your cup of tea but it does provide a uniquely strong example of the genre’s focus.

What is peculiar is the real lack of dialog through out. Rather you are reliant on framed occurrences, and moments of chilling horror that follow the child Ana between various stage of her life. This horror element is not your usual serving, but rather a deeper integration with your viewing experience.

It’s these various stages that follow Ana much like a storybook narrative. “Amer” never really ascends to any typical sense of true horror forth comings, but like a reoccurring nightmare there is a tonality of it that follows her thru life and thru her imagination. Thus, this specter that seems to haunt her from moment to moment is always present in a almost subconscious sense. Amer also excels in leaving much of the premise told per facial expressions, subtle movements, detailed framing and choice editing that really exploits the visual sense of the story in its own way. Even as Ana walks with her mother in her teen years, we can sense the tension, the curiosity, the expectations and the exploration of new sensations with new curiosities. While it is clear that this film was meant to be seen on a big screen for full impact, we can also grasp the intention of full immersion from a piece like this even in a home viewing setting.

The premise of Ana’s life cycle is cleverly woven into a terror meets sensual relationship. This relationship is never really clear and we assume some sort of upbringing relationship with her experiences in the household and observations of her parents mother. Ana lives a rather charmed life in the midst of a well to do villa and her surroundings. What was intended with “Amer” may not fit into any one mold or explanation. It is however a front to back experience that is brilliant in its own context of motion, sound and pictures. Even without the need for narrated dialog we get what the directors sensory intention is.

In credit checking it wasn’t clear to me who or which 3 actors played Ana at her 3 stages. Though hats off to the casting for finding 3 actresses who actually resemble each other and can capture the same sense of her character in all 3 phases. “Amer” is different horror, and with that statement perhaps its own breath of fresh air.