Film Review: The Girl with The Dragon Tattoo (2009) 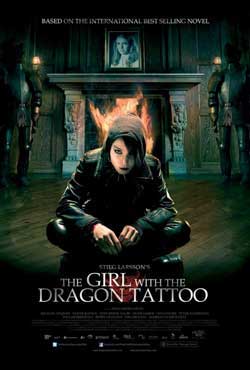 Forty years ago, Harriet Vanger disappeared from a family gathering on the island owned and inhabited by the powerful Vanger clan. Her body was never found, yet her uncle is convinced it was murder and that the killer is a member of his own tightly knit but dysfunctional family. He employs disgraced financial journalist Mikael Blomkvist and the tattooed, ruthless computer hacker Lisbeth Salander to investigate. When the pair link Harriet’s disappearance to a number of grotesque murders from almost forty years ago, they begin to unravel a dark and appalling family history. But the Vanger’s are a secretive clan, and Blomkvist and Salander are about to find out just how far they are prepared to go to protect themselves

The movie created from the award winning crime novel of the same name is a product of author Stieg Larsson. This being the first of 3 books ( and films ) under a trilogy named “Millennium”. “The Girl With the Dragon Tattoo” is a murder mystery thriller sporting a rather involved plot that has our focal character Lisbeth Salander (Noomi Rapace ) at the heart of each story. Lisbath, a bright and intelligent hacker works as a researcher with a focus on investigation. Her special gift of a photographic memory gives her an advantage in her field. Lisbatth though, is a troubled youth with a dark history of violence and drama. Her antisocial punk rocker persona is rooted in a darker past that has made her who she is today. At current she has a history of being in psych wards released under the care of state appointed guardians. Though as we find in the film, even guardians can have a darker purpose in mind for her which involves what we assume to be an additional history of sexual abuse. Her latest guardian black mails her into performing oral sex in exchange for access to her own funds. The scenes are explicit and help to sympathize with the character’s sorrid past. We also learn in the process to what extremes she can turn the tables on those who make her out to be the victim.

Though as the film builds upon her character thru showing and revealing, the true nature of this story is a crime drama involving journalist Mikael Blomkvist (Michael Nyqvist )publisher of Millennium magazine.

In the film start, we find Mikael undergoing a trial for his investigative techniques on a libel case in which he has just lost against a Swedish billionaire industrialist named Hans-Erik Wennerström. He is to be sentenced to 3 months in prison. It is during this time he is approached by Henrik Vanger a former CEO of a family owned Vanger Enterprises.

Henrik explains that his favorite niece Harriet has been missing for over 40 years in which he would like to hire Mikael to find her killer and what ever information he can dig up. This opens an private investigation into the whole Vanger family, a wealth powerful seedy bunch with a history of snide, selfish behavior who only exist for the purpose of wealth and power. It is during this investigation that he is helped by Lisbeth who has been hacking into his computer unknown to him for quite some time. Lisbeth was hired before hand to dig up data on Mikael but finds herself becoming fascinated with the recent work he has been investigating. This leads to an inevitable team up and a rather close relationship.

The film is cleverly written in that it mixes the elements of nazis, power, religion and wealth into a criminal minded facade that explores darker well kept secrets. At the core of this premise is a mystery about what happened to Harriet and how they go about unveiling clues through old pictures, articles, and public records. We also learn more about the Vangers and some pretty nasty secrets that have stayed hidden for 40 years.

It’s a brilliant thriller that will keep you glued to the story right to the very end. Director Niels Arden Oplev has faithfully captured the essence of the book into a impressive cinematic version that also introduces us to the enigmatic character of the troubled Lisbeth. Actress Noomi Rapace is the perfect match to play the dark tonality and range of emotions needed to bring Lisbeth Salander to life. This Swedish subtitled film has grossed over 10 million as of November 2010. One might also assume a sponsorship from Apple with the frequent amount of times their computers and logos appear in the film. Though this would be an assumption. In any case IMDB had some extra interesting fact about the film as listed:

Noomi Rapace took her motorcycle license as a preparation for the movie.

Lisbeth Salander’s hacking program on her notebook is called ASPHYXIA (Greek for suffocation).

In an interview on the BBC Breakfast programme, Noomi Rapace stated she prepared for seven months for her role. She was on a strict diet, took kick boxing lessons and had her eyebrow and nose pierced.

When having dinner at Martin Vanger’s house, Mikael is offered a 21 Year old whiskey. This is Bushmills 21 year old single malt, the oldest Irish single malt whiskey available as of release.

All music for this film and its 2 sequels was recorded in just 4 days. According to composer Jacob Groth, the note sheets for the orchestra weighed 33 kilos.

Tags The Girl with The Dragon Tattoo