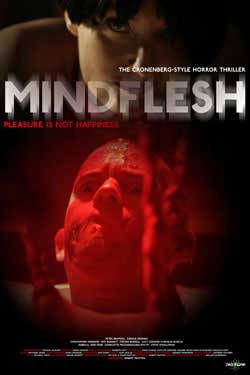 MindFlesh is a psycho-sexual horror/thriller about obsession. Chris Jackson is a taxi driver with a childhood trauma. The trauma has made him a portal for obsessions to pass from the mind to the physical world and hence disrupt the world’s multiple planes of reality. Extraterrestrials that police the universe threaten to kill Chris’ friends unless he conquers his past.

Captivating, Hypnotic, these are the words I would use to describe the film “MindFlesh”. With MindFlesh, you are taken on a psychological journey directed and written by Robert Pratten based on the original work of William Scheinman (Book Title – “White Light”). Peter Bramhill who plays the role of Chris Jackson is a taxi driver living alone obsessed with an apparition he keeps seeing thoughout his day. His hallucinations turn into reality as this ghost woman (Charlotte Milchard) becomes flesh in her blood-soaked enigmatic arrival Upon seeking the help of parapsychologist Frank Verdain (Chris Fairbank ), he is informed that he possesses a rare sense, innate by chance rather than selection that enables him to pass the thresholds of reality and in turn upset the balance between his mind an the physical planes. The result of this strange new ability has the guardians of this plane in uproar as he has taken a special liking to there “Goddess. (as named in the film) Ya, it sounds as strange to write that as it is to watch it, but without that information you very may get lost in the shuffle on screen. The physical plane for Chris is shattered at times as bizarre organic flesh beings invade his apartment and subject him to strange tentacle induced tortures.

Though this portal of mind and physical realm is not merely a “Hellraiser” occurrence, it’s a whole new inner universe that to most stay hidden. It’s within this universe that these fleshy Mongols take residence and do what they do.

In the organic sense, it does carry some Croneneberg-esque overtones that come naturally to the director. It comes across very art housy and its horror is introduced with sensory vividness. Though being a fan of obscure filmmaking and directors that take on fantastical presentations, this film is a perfect companion for cult lovers and late night trippy horror viewers. But with films of this nature, the wait pays off with resolution and answers that may have gone overhead in the initials. Hiding a deep inset childhood trauma, Chris has brought these manifestations upon himself. Only after they torture him and kill off his friends does he come full circle with his deep set past issues. The lines between fiction and non-fiction are blurred every step of the way.

A film like this has to be absorbed rather than merely watched. You’d  easily forget that you are watching a independent film production as its cinematography and direction are done with incredible flow and cinematic mastery. Though keep in mind this style is reminiscent of visual cues you’d see in films like “Lost highway”. I know as a viewer that these films are not for everyone, especially those who like it served easy and informatively blatant. Mind flesh is not that kind of film. It’s more a visual and audio experience wrapped around psychological story-telling. For fans of this genre though you should grab ahold of this one as a firm movie keeper.

The soundtrack composed by Arban Ornelas is a surreal orchestration that carries the visuals from scene to scene with haunting and dream-like composition. In fact, its so effective that the music alone often reinforces the imagery with perfect union inducing a somewhat trance-like state. I would love to see this score offered on soundtrack in the future as it would make for a perfect relaxation sitting session. Usually many independent scores go unnoticed for better or worse, but the Mind flesh musical accompaniment is quite a treat. There is also some quality cGI work and practical effects in the film. The CGI is incorporated at a minimum and works well for the scenes it’s called upon. The practical effects are also great work that seem inspired by a bizarre Barker, Cronenberg hybrid….with a small tribute to Stuart Gordon’s 80’s films.

All in all if you hadn’t gotten that sense already, I loved it! Its different, its got a firm sense of horror and its a well produced piece of work!