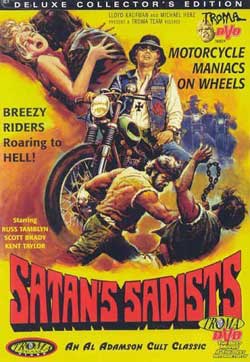 The “Satans” are a very cruel biker gang led by Anchor. The gang goes to a diner in the middle of nowhere in the California desert where they begin to terrorize Lew and his patrons and his waitress, Tracy. After a little killing, one of the patrons named Johnny manages to escape from the bikers into the desert. They need to reach a town before the Satans catch up to them and kill them.

You wanted the best, and you got the best….. Well hold on, here. Maybe not so fast. We’re gonna take a trip back to 1969, where this film was being hailed as one of the most violent of the decade. I really beg to differ. Though those were the times when the ol grind house style of biker gang films were pretty common and pretty popular. In fact, this film was reported to have been shot at Spahn Movie Ranch in Simi Valley, CA at the same time when Manson and his cronies were living there. Well, I had to take a retro trip back on this one as by today’s standard it’s pretty tame and pretty cheesy. For one, I thinkthe best thing going for it is it’s title which probably will sell a few copies on that alone. Really there isn’t much sadism and there especially isn’t any Satanic activity. The title is the moniker issued by the gang who pride themselves on being brutal, careless and take-life-by the-horns-womanizers. In summary “Satan’s Sadist is a biker gang lead by a floppy hat wearing Russ Tamblyn who calls himself “Anchor” (My first thought on Anchor, was who’s the Billy Jack wannebee with a bad sense of fashion). Anchor and his knuckle headed band of thugs exist purely to drive from town to town doing as they please. This usually involves being obnoxious for no reason, raping woman and killing a few innocent people when they feel like it. The film’s most violent scene stems from a road side diner incident where a few locals actually stand up to them demanding they go on there way and take the trouble with them. Anchor, who’s usually the cool headed dude of the pack decides he’s gonna take these good upstanding citizens outside to rape and shoot in the head. No real reason, ……just because.

Other moments have them arriving at remote locations and taking advantage of the women on hand. The group also features a Mohawk thug by the name of Firewater, and a few stoners who go by names like Acid, Muscle, Willie and Romeo. The lady of the pack, …..pun intended has a crush on Anchor despite being called a piece of meat, worthless and replaceable. She performs a dated but inspiring table dance at the diner stop to try and grab Anchor’s attention. This of course doesn’t sit well for the diner owner. Yuo have to take all this weirdness in context, which becoems a source of unassuming humor in itself.

The premise is really rooted in the paranoia of cruel biker gangs from that time. This latest edition is a restored version per oldies.com that actually looks pretty good for being from 1969. There is nothing comedic about this film accept the ridiculousness of the characters, their reactions and the way the woman in the film are easily manipulated and taken advantage of. When one of the ladies from the diner escapes their grasp with a local ex marine, the gang heads out to the quarries to hunt them down. This ends up being the confrontational demise of the gang as each meets a rather deserving death. More ludicrous behavior comes rom one of the gang who’s so stoned he plays Russian roulette with himself until he finally pulls an unlucky trigger.

Anchor by default seems to run the show even if he looks silly with his jug head hat doing it. There is not much substance here only meaningless violence and the exploitation of woman, gangs and drugs. The film falls into a cult / grind house category because of its dated presentation and Born to be wild classification. It’s no Easy Rider but it is early exploitation violence mixed with biker nonsense. If you can remember drive-ins, this is the stuff they were made of.
This classic cheese ball film was directed by Al Adamson who had his hands full in the grind house circuit.

IMDB had a few fun facts on hand to go with this raunchy cheese-gem:

The red tinted sunglasses that Russ Tamblyn wears in the film were his own idea, and his floppy hat was a carryover from his previous film, Scream Free! (1969).

Director Al Adamson instigated the project after a more expensive production that he’d been working on collapsed. He was able to put the financing together with producer Samuel M. Sherman, hoping to cash in on the wave of biker movies that were enjoying popularity in the late ’60s.

Generally thought to be the first film to feature someone being killed by having their head shoved down a toilet.

Russ Tamblyn’s mother hated the film and blamed it for ruining her son’s film career.

The film put Independent-International Pictures on the map. It was the company’s first production and proved to be a big hit at the drive-ins in 1969.

Shot on the more inexpensive 16mm stock (to compensate for having to pay “named” actors) and later blown up to 35mm for theatrical release.