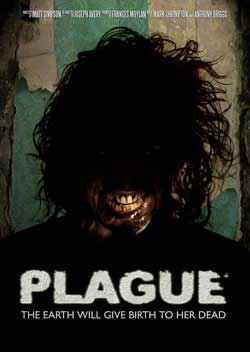 Plague follows the journey of Vilhelm, a lone Latvian refugee, trying to escape a shady past of trafficking guns. He travels to Britain, feeling certain that he has put the worst behind him. The reality he finds is a living nightmare, the dead have risen to consume the living

A dramatic zombie short that takes the direction of “all hope is lost”. A lone traveler makes his way to a seaside board walk and reflects over the past few days. It’s an apocalypse of sorts that has zombies emerging from a viral plague that we assume is some form of the end of things as we know it. All the usual zombisms are apparent such as get scratched and you’ll become one, kill them per head infliction…..well you know the rest. Our subject talks in narrative reflecting on the state of things that are upon him. As the short draw to a close it’s apparent why and what journey he has been on. Instead of going in the violent visceral route, Simpson tackles one man’s last revelation. I’m not sure if there was clear message to this short. I kind of got from it that, the odds are always against us, no matter what paths we take. Sooner or later it all catches up.

The short is presented in well shot directorial effort that is enhanced by some pretty spot on editing. A hint of tonality, silhouette and a smart use of perspective angles makes this a fine addition to the zombie troupe. As I watch more and more of these shorts, it’s becoming real apparent that there is alot of zombie filmmaker talent coming forward making its way up the charts. I’m sure we’ll see more from Matt and his crew as they have the talent to pull it off. Directed by Matt Simpson