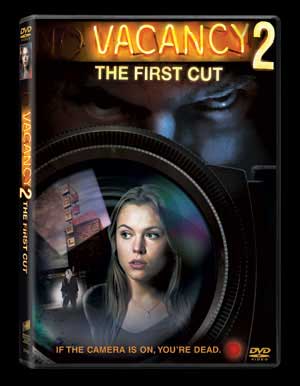 After checking into a dingy room at the remote Meadow View Inn, a newly engaged couple (Trevor Wright and Agnes Bruckner) and their mutual best friend (Arjay Smith) begin to suspect they’re being watched. Little do they know they’re also being hunted — and their deaths will be caught on camera. Scott G. Anderson reprises his role as the murderous Mr. Smith in this grisly prequel to Nimród Antal’s original thriller.

Hot right off the heels of Vacancy one, comes it’s sequel diving into Hotel paranoia again. I think in this point of my viewing sessions I’m beginning to really grow tired of certain repetition scenarios, though with that being said Vacancy 2 was alright. Hollywood has tapped into new fears, or is it old fears presented in new ways? Not sure but the trend I’m seeing is really coming off of a paranoid culture. Paranoia of the midwest, paranoia of sleazy motels, paranoia of being filmed, paranoid of being killed by a bunch of hicks in the country. If you think about it, its a formula that works only because it is based on real fears. So the horror is more reality based than fiction based (Krueger, Pinhead, Chucky)

The first vacancy I really liked, but let’s save that for its own review. This time we find ourselves back at a shady hotel in the middle of nowhere run by some yokels who pass the time making a few bucks on the side. The business? well up to now amateur p*rn taped per way of hidden room video cameras. Most of there clients being cheating husbands or newly weds. Well the pond has dried out as amateur hotel p*rn is not selling like it used to. In comes Smith (Scott G. Anderson) who murders his date on camera for no apparent reason than the thrill of it. So the good ol boys, not sure what to do, tie him up until they arrive at a cash flow deal. In other words, snuff films are selling “real” well. I think you get the idea how it rolls out from there. Insert new young couple, a family friend, a group of snuff amateurs and a 1 happy to be there serial killer persona.

Maybe its its me, but I keep seeing alot of familiarities from film to film. the hicks don “Strangers” masks, the kids look like they just stepped out of every other young teen film, the towns all tend to to look like Texas chainsaw territory, the cops are always corrupt and skimming off the top. Middle America is just plain bored and has taken interest in horror p*rn for amusement. Oh ya, and the actors always make “bad” choices in there on screen antics. Tell me, have you ever seen teens trip so much as you do onscreen? There is a level of suspense through this film. I couldn’t help though but feeling very little for the characters, the direction and the turn of events.

One noticeable detail was the camera style used. It’s become trendy to use handheld’s, and jerky steadicams to give part voyeur and part viewer engaging in the shot for shot. I’ve seen it work good and not so good. In Vacancy 2, it worked for some sections but not for all. The intense moments I found fitting for this, though when a character slows down and goes through an emotional moment you really need to switch back to static shots. They didn’t. So what we have is a girl crying, resting and the camera is still jerking around. Not a good call on the cinematography.

The film has a professional look, but felt rushed. By the 3rd act I was ready to eject and call it a day. The main characters weren’t on screen long enough to really bond with, so as mentioned before ..them getting chased and killed wasn’t a mental loss when it came down to it. The film falls into a “very formula-driven film style. Some new viewers might get a thrill or too. But us seen it alls will be bored and disappointed. I give it points for being a nice production. I also take away points on forgettable characters, some mistype-casting and a seen it, done it, watched it ..lasting impression.

What is my recommendations:? I think this would work as a date film but not a theater film. I think this is worth a rental but not a purchase. Hey if you can wait long enough, this makes an excellent choice for the Blockbuster 3 for $15 deals. there ya go….your options have been presented.