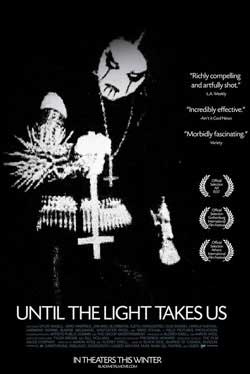 Death Metal by now is a phrase that is quite common in the music circles. In fact its used so often that many bands are classified under that moniker without really being a part of the true scene. The film “Until the Light Takes us” takes a deep and hard look at the scene that started it all. More importantly the scene that doesn’t want to be a scene, the movement that doesn’t want to be recognized, and the irony of it all. Norway is the primary location… which is the first irony with its beautiful country, atmosphere, lakes, mountains and tranquil environment. Yet from perfection comes darkness and in this case that darkness is in the lost souls that have dedicated themselves to this thing called dark metal. You may have recognized it somewhere…the pentagrams, the makeup, the loud frenzy of power chords blasting away or the unintelligible lyrics.

Maybe if you missed that then I’m sure a CD cover or 2 have come your way. In any case the film defines these folks in a dark manner, not like the connection that ones makes with the folks from the “Anvil” documentary that has a humor tone to it. There is no humor here. In fact if anything it’s been saturated with tragedy, arson, death and depression. We learn about quite a few of the participants of the music circle who contribute commentaries and interviews on camera. With most being Norwegian, the names are bit harder to catch on the fly though I can cite a short list of bands who contributed to the interviews and filming.

The music is hard to describe as it flips from chanting gothical lullabies into deranged riff chugging. I myself have a hard time seeing the colors thru the gray that differentiate it from other bands who call themselves thrash or dark metal but the ones who care do …..which is what this film is about.

The art itself has gorwn and expanded. The film shows examples of gallery showings, terrorist movements and cause and effect tragedies that occurred along the way. Particularly at the focal point is the outbreak of church burnings caught on tape. Black metal being a music rooted in Satanic interest proclaims a hatred towards Christianity. In fact the Norwegians themselves who are part of this circle feel that Christianity has invaded there country. The burnings are the result of the backlash which have already placed members of the movement in jail sentences. Though as we dig further, it is revealed that the Satanic interest was actually fueled falsely by media exploitation. This is turn created a new batch of copy cat black metal groups who took this to heart…thus confusing the trend even more.

Others like this we are exposed to are found guilty of murder and arson. “Death” a BM singer, is found with his head blown open per a suicide binge. The result is a priority picture taking session and a future album cover of the event. Not something regarded in any sense of good taste.

My first impression was that with the death metal classification the documentary might be more geared towards the horror element of things. Rather my impression was that many of these musicians suffer from depression and anxiety with the way things are. At least to them that is. There is a inherent gloom and darkness that surrounds them and reinforces the symbolism element of there cause. Music is the release, lyrics are tainted and jaded, and the attire is pretty similar in nature.

The film was directed by Aaron Aites and Audrey Ewell who in the interest of capturing this documentary moved to the Norway area to follow many of the subjects in day to day. The result is a thought provoking look into the lives of such profiled individuals. While the purpose here is to obviously expose and perhaps promote the black metal scene, the movie contains very little surprisingly in the way of musical performances. Rather we follow along a few or the perfomers thru the streets of Norway. Though I cant seem for the life of me how this film can paint any positive view of the scene with all its negativity.

In summary, the film itself is a real eye opener into this tiny circle of culture, though the participants carry much of the same notion as Goths in that they draw dark karma in there quests. Will this music styling take off in spades. I doubt it. There’s is a close circle of admirers and like individuals who want to share in the misery. The difference is the bands that contribute are put on a pedestal as examples and symbol of there cause…whatever that may be.

Tags Until the Light Takes Us