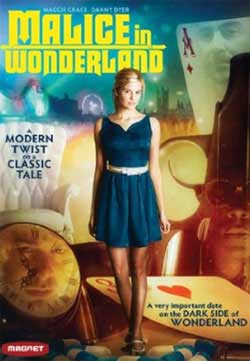 An American law student in London. Knocked down by a black cab, she wakes with amnesia in a world that’s a million miles from home – Wonderland. We follow her adventures as she’s dragged through an underworld filled with twisted individuals and the lowest low-lifers, by the enigmatic cab driver, Whitey. She needs to find out who she is, where she’s from and use what wits she has left to get back home in one piece. As her journey progresses she discovers nothing is what it seems, realizes that fate and life are terminally entwined, and finds true love lurking in the unlikeliest place

I’m a sucker for a good turn of interpretations on the old Alice in wonderland concept. Director Simon Fellows has presented such a unique version that I had to indulge in his re-telling. Sure, you can’t help throwing in ways to perceive it off the bat, so I went with a modern British telling that combines Alice in Wonderland with the character oddities of “After Hours” (Martin Scorsese). If I can get my small complaint out of the way, I have to say I was disappointed the DVD release didn’t include subtitles to follow along with. This is of course my preference as films with heavy British accents serve me better that way. However…on with the show.

Maggie Grace plays the role of Alice Donovan, a girl on the run who happens to lose her memory in a accidental car occurrence that leaves her knocked out when a time obsessed taxi cab driver runs into her. Nothing fatal of course, but enough to completely erase her sense of who she is. Whitey, the cab driver played rather well by actor Danny Dyer is your metaphorical rabbit of the film. Always on the go, checking his watches and keeping in time. Now before we get too far in the premise, the writer Jayson Rothwell has done something unique. He has taken the basic premise of Alice in Wonderland and used regular or irregular for that matter urban characters who play the roles of the original fairytale. In short, we just make the associations, without always having to be literal in names and symbolism. Though the Alice in Wonderland premise is always lurking as subtle name dropping and associations are made to the viewers.

Quite literally these concepts are introduced in the real world aspect than so much the cartoonish aspect. When Whitey offers Alice a pill to cure her headache it is in fact a drug that knocks her out. Gonzo assumes the role of an urban mad hatter who while assuming a certain level of control is in fact a pawn himself. Though the most amusing character goes to a drug dealing pot smoking urban Rastafarian who calls himself Caterpillar. His passion for rhyming words and driving around in a smoke filled car make a brief but appropriate appearance. Whitey who’s heart is in the right place but head isn’t sometimes, drops Alice off at a bus stop while he makes plans for a high profile birthday party being planned for Harry Hunt.

Harry is the local kingpin crime lord who by all literal associations is in fact the final destination and stand in for the Queen of the original tale. Though things get complicated when Whitey finds out who Alice really is, as the lost or assumed kidnapped daughter of a local billionaire. A 10 million dollar reward is posted and suddenly Alice is in demand for claim of the prize. While Alice walks around in sort of a daze still trying to regain her memory, she encounters a brothel, a mind reader and a few unsavory characters. DJ Felix Chester the assumed Cheshire cat provides a certain amount of aid though intertwined with riddles.

Malice in Wonderland clearly toys with the real and surreal thru well placed characters, a touch of modern, an air of the absurd and a slight hint of fantastic. What is most intriguing of all is that the film has a fine sense of journey. The fairy tale aspect is mixed up and more subtle at times, but if you listen carefully you’ll pick up certain aspects that relate to it. Usage of well placed camera angles and vibrant colors gives the film its “not quite in Kansas” flair but never gets too carried away from a sense of urban grounding.

It’s clear that Fellows has chosen to paint his own re-interpretion to fit a certain direction. Comedy, a bit of light romance and an underworld of crime make for a nice match of themes that put this film into the “deserving to take a look” category. If anything, its clever and evolving but most of all, it gives you a nice change of pace from the norm.