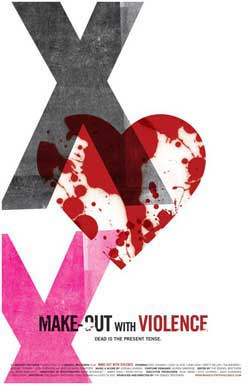 Reeling from the disappearance of classmate Wendy Heart (Shellie Marie Shartzer), the lives of twin brothers Patrick (Eric Lehning) and Carol (Cody DeVos) take a dark turn when they discover the body of the teenage beauty — and much to their surprise, she’s not totally dead. Mystified by her condition, the brothers stash Wendy in their family’s abandoned summerhouse and search for ways to bring her back to life completely.

Once in awhile comes a film that offers a serving of horror combined with elegance. “Make out with Violence” is that and alot of things. It pulls you in, hypnotizes you and occasionally throws something at you that shatters your nerves and sends a chill down your spine. I was quite surprised when I sat down to view this film. It somemhow gives you that tranquility essence that I compare to “American Beauty” but yet grabs you in a freaky moment now and then. Before getting into the rather uniquely, retro feeling, urban coming of age with a twist of haunt film, I should mention the rather comforting and excellent sound track score provided as a under base by composer Jordan Lehning

The Deagol Brothers have style I’ll give them that. They also know how to film, write and make a movie. No, not your usuaul grab a camcorder low budget effort but something special that sticks to you and tells a story in the process. The fun part of this is, that it’s not really a straight forward horror film. In fact you could edit out portions and it still would be a great small town relationship film.

The horror elements that come and yet might feel out of place, still manage to be an integral part of the experience. The fact that you signed up for a horror film changes as you roll with the life experiences the kids in town throw your way and remind you of days past youth.

Makeout of with Violence is a unique title. In fact it doesn’t register what “that” refers to till the last act. The story starts on a solemn note as “Beetle” (Brett Miller) the youngest brother of 3, narrates the disappearance of Wendy Hearst (Shellie Marie Shartzer) a local school girl and friend to the family. She made quite an impact on the boys and their friends who was well liked and fun to be around. The older twin brothers are Carol (Cody DeVos) and Patrick (Eric Lehning). They are the focal point the film that follows them through emotions, relationships and there discoveries. The discovery happens to be the body of Wendy who is found in the forest. The quirk here, that separates it from scenarios seen in films like “River’s Edge” is that Wendy is still “somewhat” alive. It’s never made quite entirely clear but she has come back in a form of a haunting zombie state. Her movements are much like a body without control of muscle navigation and her eyes are glazed over from being underwater. The fact is, Wendy is indeed undead. This presents a problem and a fascination as the boys bring her back to clean her up and take care of. Patrick, takes the lead and nurtures her over the summer in some hope of regaining the former version she embellished before her undead state.

Meanwhile in the local point of view, Carol instigates his crush on friend Addy (Leah High), the town throws an Eulogy for Wendy with an empty coffin, Anne Haran (Tia Shearer ) becomes infatuated with Carol and it’s business as usual as you’d expect in he lives of a suburban teen environment. The story doesn’t play out into a typical “dead girl undead” type of fashion. It actually leaves that issue as a subplot within the course of a summer. Jealousy, rage, sorrow, love, and friendships make up the meat of the film.

While I will give kudos to the entire cast, A special mention goes to Shellie Marie Shartzer who played the role of Wendy. Her on screen movements were so haunting and appropriate that she could easily find work in several future films that require such supernatural roles.

I was impressed with not only the poetic fashion in which the film plays out put with the sense of emotional framing the filmmakers chose to display things on screen. A certain stillness of imagery at times, a unsettling display of living dead movements, a bit of perspective camera work to heighten emotional segments and all interwoven with a very intelligent soundtrack. MWV is a very photographic effort that will confuse, bewilder and still feel at home to viewers. Looking for a change of pace…give this masterpiece a whirl!