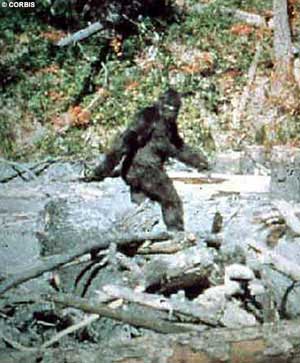 Standing 8 feet tall and weighing well over 500 hundred pounds, with reported sightings all over the world in all 50 states and on every single continent, comes one of the most exciting monster to ever come out of a creature-feature. It is probably the most well-known of all crypto-zoology myths, with tales abundant around every corner of the earth.

This creature has been named differently all over, and is most commonly known as Bigfoot or the word sasquatch, coined by natives and meaning “wild men”.

The “Yeti”, another reported version of the Bigfoot, and otherwise known as the “Abominable Snowman” is a creature reported to live in the Himalayan mountains. There have been many sightings of the beast, describing it as a six to eight foot biped covered in dark fur.

Notorious in the Southern swamps, the “Skunk Ape” is best known for its distinctive scent. It is believed that all reported humanoids have a strong musk, but in the incredibly humid and sticky climate of Southern states, it amplifies the smell to new levels. These particular forms of the “Big Hairy Monster” family are commonly portrayed to be some of the largest, with a misshapen head. They are also characterized as having a bushy tale, like that of a dog. “Skunk Apes” are said to be more aggressive, and even carnivorous. They have been known to slay and feed on livestock, normally rendering the animals unconscious and dragging them away to their death.

Nay Sayers often regard that the Bigfoot is misinterpreted and is actually a bear on its hind legs. They also state that the regions it is being reported from are very unusual for that of a large primate. One thing Bigfoot supporters have going for them, is that they get the story straight. Most stories of Bigfoot in general areas seem to stick true with common descriptions. It is highly improbable these people could have communicated a general description of height, weight and appearance.

So what is the relationship between human and humanoid? As you can imagine it is a very loving a friendly one. One fleshy hand washes the rough and oversized furry hand, so-to-speak. This is actually partly true. Some people want to help protect the animals and others want to exploit and kill them. Human greed plays host to this, as they could make a fortune if they found the first living or breathing humanoid, but if things got too “hairy”, they’d probably rely on just killing it.

In many cases. people have documented violence to be inherent in Bigfoot, and the idea exists that they are nothing like their “Harry and the Henderson’s” counterpart. Many tales tell or the creatures throwing rocks at humans, possibly as a warning sign they are too close or encroaching on the natural habitat of the animal. So, what happens if you build a mining community right where the sasquatch nest? Trouble may follow:

“Stan Sweet, a teacher in North Bend, Oregon wrote to ask if there were any recent reports around a place called Thompson Flat, on the Sixes River, on Oregon’s south coast? This is a very remote spot, between Powers, Myrtle Point, and Sixes, Oregon.

According to local legend, the place was a mining town in the 1800s, but the inhabitants were terrorized by a “wildman.” Slowly the town’s people left the remote site, not wanting to deal with the strange, hairy creature(s) living there. Until quite recently, an old prospector lived there. I had a chance to speak with him once and he described seeing a creature fitting the Bigfoot description on a number of occasions. Stan Sweet [The Coos Bay Historical Society has a couple of documents containing information on the Bigfoot that terrorized the Thompson Flat area:

“In the old days, after all the miners had been run off by the wildman, one brave miner decided to stay. …Some time later they found him at his sluce box with his head bashed in by a bloody rock, which was still lying nearby.” At the time, the old miner was the only living soul in the area.”

In 986 AD, Leif Erickson wrote about monsters in the new world that were very large and hairy, and had black eyes. Sightings of these “wildmen” reportedly go back as far as 1847 in the Pacific Northwest, a place where the most sightings occur. Natives spoke of hairy cannibals who resided on Mount Saint Helens. However, other people think of the hairy monsters to actually be gentle giants, only coming out on a nocturnal basis and feeding on plants and small animals. Bigfoot are very frequent in pop cultures and movies. They are sometimes depicted as friendly, gentle creatures, and other times as blood-thirsty and vengeful. Some towns even use their Bigfoot myth history as a way to promote themselves and attract tourists.

The Sci Fi channel would have you believe that the reason Bigfoot can not be discovered is because it moves at lightspeed. But, in all versions of the Sci Fi channel movies, whether it’s ‘Sasquatch” (Originally “The Untold”) or “Abominable”, the creature is always out to stalk, and eventually kill you. There is theory that the Bigfoot hide their own tracks to keep from being found. Many footprints have been found, however, and countless molds have been made out of them.

Off the rivers of Oregon, there have been many carved idols found left behind by natives who resided on the banks. These carvings seemingly represent some time of monkey or ape. Without prior knowledge of what apes would look like, it is puzzling what the carvings may represent, with no primates in the region.

Evidence is being hatched from all corners of the earth, with no actual solid data being formed, it would seem. The most well-known piece of evidence is a film shot by Robert Patterson and Robert Gimlin. In the video, a female Bigfoot is depicted striding towards a grove of trees at a slow pace, glancing over its shoulder at the men. This important piece of evidence is widely debunked as a man in a costume, however many scientists testify that it is plausible.

However skeptical the scientific community will continue to be until solid evidence is found, bigfoot legends will continue on. This animal, whether real or fake has been part of our human history for hundreds of years, and could very well be the missing link or the transitional fossil of our evolutionary history. Most importantly, these myths grow through communication of human-beings, and makes for a good campfire tale or two, providing us with excitement and wonder, until the beautiful and mysterious creature decides it’s finally time to show itself.