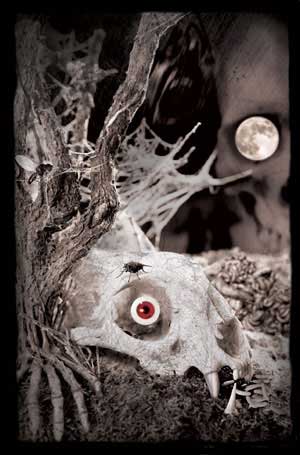 Dark Delicacies is the first edition from the IDW line of comics to come our way. Set up like “Tales from he Crypt” each edition is designed to feature 2 horror tales by noted authors to be released quarterly. this first edition contains 2 tales titled: “Part of the Game” AND “Dog”. It also seems that horror anthologies are making a comeback based on the recent re-publishing of Tales form the Crypt and others. This is fine by me as these comics bring back memories and in some ways are the heart of true short story tales.

Now moving on to the stories we have 2 fine tales Author F. Paul Wilson, Steve Niles, Joe R. Lansdale and Neal Barrett Jr., Art this issue was produced by Douglas Draper Jr. and Jerry Beck . Our first story which is my favorite of the 2 called “Part of the game” is a classic example of careful what you ask for with a clever resolve. Our main character detective Sorenson is a hard nosed cop who thinks he can bully the local crime syndicate into giving him a cut of the take. Operated under a mystic named mandarin , Jiang his massager is sent to meet with the detective to discuss terms. Well things go pretty badly as the detective threatens to bring the heat down is a deal isn’t made. The locals don’t take to kindly to foreigner threats and unleash a lethal centipede into the detectives room. As the detective gets bit, his health suffers and finds himself even beyond the doctors help in this case. It s revealed that the source was ordered by the mandarin and a antidote may be available. this sets up the story which of course take its own turns typical of horror anthologies style. The artwork is done nicely with a chalk and smudged technique giving the images a pretty dark contrast . Though of course with chalks most of the faces look like the characters haven’t washed in awhile.

The second story is better as illustrations than an actual tale. As the take is pretty basic. A bike rider becomes prey as he’s chased through the woods by a vicious wolf like dog. The dog is is unrelenting in his pursuit so the boy has no choice but to fight for his life and try and out smart the animal. Of course the battle goes on and the boy uses his wits to overcome. Really that’s all there is to this tale. The artwork I prefer over the first, though the first has a better story. So you get the best of both worlds. This series looks to be an interesting one that I’ll be looking forward to in the future. The comic is printed on nice gloss paper with vibrant inks and is available in 2 cover variants. There is also an introduction by the editor which gives you a quick overview of the new series. A nice start to the series!

Meet Your Scream Queens (and Kings) Tonight in L.A