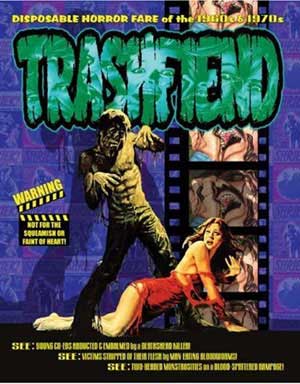 Headpress and author Scott Stine did the work for us. When I say “us” I’m referring to older generation that grow up in the 60’s and 70’s. At age 42, I still have fond memories of the materials that were produced and made available. Many films and probably the edited versions were still featured on Saturday Afternoon horror shows. I watched each week with anticipation and curiosity in a way that one might consider collecting experiences of old school horror. Many of the racier 70s films were restricted to young eyes, so I knew when I was of age, I’d have my chance to give them a go. This book however is not only for the old but for the young, who didn’t get to experience those memories.

Through the glory of digital age and re-vamped versions, youngens who think of the 80’s as old school can relive these gems and probably under better conditions. If you are one to dismiss them off simply as cheesy frankenstein, Dracula movies you are sadly mistaken. The movies of past eras were inventive, groundbreaking, controversial, unrestricted and at times extremely horrific even for today’s standards. The other bonus is the trends of being extremely weird at times. You see these were the days that weren’t as constricted to moneymaking, corporate standards as much as you find in today’s market. So in many cases, what you ended up with were products of creativity and less of formulas. So when you indulge in these keep that in mind. Originality came from the mind and not so much the statistics.

Stine knows that era well and has created book that collects and celebrated much of this time. The toys, the films, the games, the collections, cartoons, the magazines and everything in between. Just flipping thru you’ll get a nice peek at the artwork featured when posters were still hand painted You’ll come upon the glory of the “Creepy”, the Haunt of horror” and EC offshoots that introduced anthology style stories. Which would later grow into many great like films of this nature.

In reviewing this book, one thing will stand out over all. It’s the simple fact that there are alot of films I’ve never seen before, alot I’ve never heard of before and alot that are equally obscure to even track down. TrashFiend celebrates this exact same line of thinking. Lucky for us though our author has spent the time to track these down, review them and give us thorough oversite. The titles alone are enough to interest. The films themselves, as he notes range from classically essential to pure garbage and schlock. Though I find, the ones I could track down offer a special something that we just don’t’ find in today’s market. Jumping quickly to page 104 you’ll notice the all too familiar 4-5 run marathons of obscure titles that use to frequent Drive-in showings. “Cornbread, Earl and me”, Blacula”, “black mama”….these were a few of the blaxploitation runs, though many film showings of blaxploitation or not ran this course of all day cinema affairs.

Today we lack the grindhouse environments that showed these films but can still pick them up in collections that have resurfaced in the markest. Author Stine offers a very easy to read review style that connects and educates. His love for the genre is apparent and he’s not afraid to let us know if the film is a real stinker .Further chapters look at the comics and toys of yesterday. Bass and Rankin are featured with there most memorable holiday TV shows. While in there origin, the franchises were downplayed but later years would find a whole new audience of young and old who would appreciate collectable releases and toy replicas of the shows. Stine spends alto of time going over many of the horror comic series that each hold there own stories. We find though alot of similarities in tales of the industry being a virtual roller coaster, lines being discontinued and struggling artists who’s stories will never see the light of day.

While the majority of the book is black and white, we do get some color pages per middle insert. What’s most satisfying is the number of photos, posters and art pieces that are featured thought out to give visualization to the films and products discussed. There was more that one occasion I would do a double take and say to myself…”oh ya”. Last but not least Stine has added into the narrative quite a few well versed interviews with a whole variety of talent. These end up being stories in there own right as the interviewed talk about the “days” and the products they were involved with.

A great book, that shows a greta love for the genre and ancient. Though this I found myself educated as well on titles and such that I’ll be seeking out on my own. I found the pages alot of fun with alot of shlocky stuff to reminisce and be informed on, very enjoyable and great accomplishment for readers to embark into.